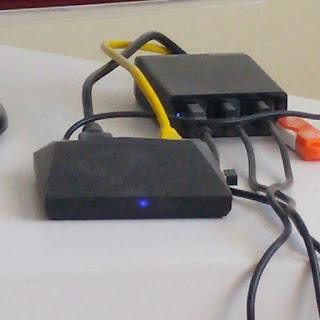 Here is the kicker. Most people who cut the cable go to just streaming services instead of a device like you see here. As well all but one person I know who has a Loaded Android Box has cut the cable first in order to save money to pay the bills and feed themselves - NOT to screw over the cable companies.

If you get a basic package all you get is shows that are geared for the hard of thinking quite frankly. This leads you to paying for several other packages on the service and pills up the bill in my case to $120 a month. For me to be watching literally 5 TV shows that I enjoyed watching for $120 a month is absurd.

Yes I did actually like the concept of being able to blindly pick threw channels to watch something when I had nothing else to do. But I can also save a pile of money and just watch something on YouTube or Netflix instead.

It's actually a bother to use Kodi to watch things and if I had a lot more money than I do, I would still have cable TV. You see the quality of the streams is never that great compared to Netflix or Cable. As well you are sometimes faced with content that is NOT what you wanted to watch or subtitles over the image for some language you don't speak or read (this is distracting and annoying).

If I had the ability to just pay for the Basic cable and the very few other channels I watched, then cable would be a lot less money and a valid option. But having to have 4 different packages all from $10 to $25 in price just to watch 5 TV shows I like is not a valid option. I simply do not have the money to do this. I am on disability and only get $1123 a month. What is left over after rent, food and bills is not all that much.

I was left in a situation that the ONLY way to pay for the shows I like is to shell out $120 a month for a pile of channels I will never watch.

Would you pay continually for someone else's gas at the service station and not be able to get a ride from them? No you would not. Yes some channels are pick and pay, but not one of the channels I want for the content I want is in this category.

Then there are things in the so called basic package you HAVE to pay for by law in Canada. Things that I have never and will never watch. But they government demands that these channels be there to subsidize content that is forced on us. I don't speak french and I am not a Christian but they push on us 3 french channels and 2 Christian channels. Why the hell are these specialty channels not in some package? Oh because no one would want them and they would fail.

The more demanded content and the most viewed are all in the highest price range. Shows that are vastly popular and the networks that put them out want large profit for it instead of making it up in bulk. Then the cable companies and the content providers say they are being ripped off by people streaming and downloading.

It's a sad reality that most people I know literally just can't afford to pay for cable any more. The bills go up and up and up and the content stays the same. There is also only the choice of pay large amounts for good content and have the "basic package" you don't watch or have nothing at all.

Honestly I think a lot of people would go back to cable if they just had to pay for the channels they want and no all the extra stuff they don't desire to watch.