GOT MYSELF WHISKEY FOR MY BIRTHDAY 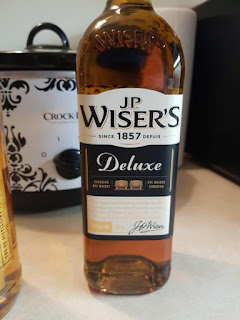 For the price this is a good find. I enjoy the taste of it and it's not harsh. I got it for my birthday on the 18th of November. I got it early as it was on sale for $4 off or something like that and there was 5 bonus airmiles with it. The airmiles will top me off to having $20 worth next month and that will pay for the Christmas whiskey.

I used $20 of airmiles to get this one and another bottle of not as good stuff.

Come my birthday I'll be walking over to a place about 2 blocks away and having dinner with my friends. Then after I'll be coming home and watching a few movies and hitting this think kind of hard. Then I'll finish off with a couple hours of music and more of this stuff.

So I'll expect a slight hangover on the 19th as I tend to NOT drink enough water when I'm drinking hard. See if you drink 3X as much water as whiskey you don't get a hangover.

I don't tend to normally get booze as it's expensive as hell, but I wanted this for my birthday and being I had extra money from a donation I got, I got the other one as well. I got all kinds of drunk last night BTW and did in about 3/4 of a 26. So this morning my head was a bit fuzzy - as I say not enough water. This was over an 8 hour span though - but being that I don't drink often, I got drunk as hell. That being said, given my size - it does take some doing to get that drunk.

I was intending at first to have a couple of beer with my meal, but I'll just be having coffee as this will be enough later on. Anyway, for Christmas I'm going to get a 40 of some very inexpensive and not bad whiskey. That way I'll have some left over to do it all over again on New Years Eve.

Anyways - most people I know would like this stuff - it's not bad for the price as I say. It is also enjoyable by it's self like I like it. I don't mix drinks you see, I do they straight. So it's all good.