WHEN STUFF VANISHES OFF THE PLANET - AKA WHERE THERE HELL ARE ALL MY PENS? 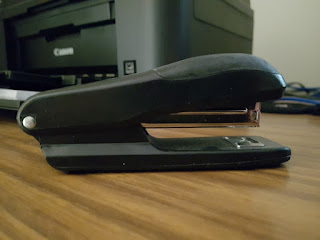 This is my stapler. There are many like it, but this one is mine... Any 1 person reading this will get the difference (to 2 different movies).

So my old stapler was a bit smaller and blue. I had it for years. I had an almost full box of staples for the freaking thing.

Well one day I went to find my nice blue stapler. It was not in it's spot. I searched the entire desk. I think looked in every place it might be. I then looked in boxes that have not been opened in 2 years or more. It was gone.

The next day I tossed the apartment looking for it and searched every location there is - literally everywhere. Nope it was gone.

So what was I going to do? I needed a stapler in the next 2 days. So after going for coffee I went and got this $2 stapler to replace it. I get it home, pull it out of the packaging and open the desk to put it where the old one used to be. Can you guess it? Yup there was the old one.

Here is the good part - a friend looked in the desk as well on the first day - it was simply not there.

So tell me where the hell it was when I wanted it and how the hell did it come back when I no longer needed it?

This is not the first time. I lost my good pen back in the 1990's. I used this thing every day of my life and carried it with me always. When I was at home it was on my desk in the pen holder.

Well one day it's just not there. So now I'm pissed off, because this was a $30 pen. I only had it for 3 months and at NO time was this in the winter. So I replace it. Cut to winter and I get my winter coat out of the front closet and here is the freaking pen. See there is no rational explanation for it being there - I never even looked at that coat after I got the pen.

Here is the real kicker - there was $200 in $20 bills in the inside pocket of the coat. Now I'm 100% sure that I would have known I had that much money in there - after all I did not have a great deal of money to toss away at the time and I would have noticed it missing.

I to this day have not one clue where the hell the money came from, but it was exactly when I needed $200 to get a repair to my car. So draw any rational or irrational conclusion here.

Speaking of pens - in the last apartment, the same desk I'm using now was in the apartment. So I would use a pen and put it beside the printer (there is a pen there now). For some reason they would vanish. Typically this would be moments after I put it down - there would be the sound of the pen hitting the floor and it would no longer exist.

Now you are thinking - he just misplaced them... Not that many I could not have. And more than once someone else used the pen and put it in it's spot and thunk on the floor and vanished into oblivion.

Now lets talk about the gas in my car. There was a locking gas cap on it. So I fill up and the next day I'm at 3/4 of a tank - not possible it's from change in temperature.

So I go to work and come out and the car is at full again. It's not like someone picked the lock took gas, followed me to work the next day - picked the lock and put it back.

Just so many strange things have happened over the years.

Heck we had a dog that would get out of the yard. The gate would be latched the entire time and out he would get - the fence met the ground so that's not it. Never did figure it out.

It's all good - my Dad lost a freaking tank (army tank) one day. Him and his comrades left it on the range and it was no longer there. Some other group found it 2 days later on the other side of the range. That one can be put down to someone messing with them - but where the HELL are all my pens?