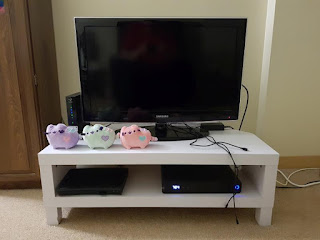 I pay a lot for cable and internet. Then again I have 8 packages and HBO. Hell I have like 12 or 14 movie channels, most of them old movies.

Here is the deal though, I sit at home by myself 5 days a week and go out 2 afternoons a week. So I have a great deal of time on my hands. I fill that time with TV and Netflix.

Most of the shows I follow I record and watch later off the DVR. But most of my day is spend watching random things to fill the time. I also watch a bunch of people on YouTube. So there are no hours in the day where I'm just sitting here thinking how alone I am.

Social media is also a big part of my day. I hit Facebook and Twitter every 20 or 30 minutes unless I'm into a show big time or out with friends. Then there is posting blogs like this one at night some times and posting a vlog or 2 a day every day of my life.

Now the TV thing Sets me back a pile of money. Then again I also have blinding fast internet. I have shopped around with the other cable company and I could save $40 a month going with the competition, but I would have to settle for vastly slower internet. To get the same I'm getting now for TV and almost as fast internet would actually be more money - so I stick with them.

I'm on the tail end of a promotional price right now and it's in the high $190's (forget exactly how much). After the price goes up it will be like $240(ish). But I can justify this quite well with the amount of entertainment I get and the fact it keeps me from thinking too much. The fact that the same thing on the other folks is more makes me stay.

People who don't do cable tend to have a lot of things to do or at least family and or pets to keep their time occupied. I tried with just Netflix at one time and I could not do it. I missed the shows that just are not on there and I can't watch streams of the shows on my TV and did not like the very low quality of streams on my tablet - so back to Cable I went. To be honest - it's $68 a month for a pile of channels all in HD.

With the fancy channels I get I also get a lot of concerts on one channel. I like that a lot. I also enjoy the nature shows and the car builds and many other things. Yes you can get that on YouTube but not the nice new ones and not in the same quality most of the time.

Most months after all my bills and getting food in I have over $150 left for other things I need. I do not have a lot of income being on disability. I'm home alone most of the time and if I did not have this to distract me it would be junk food and pop I'd spend money on (Or pizza). TV is a lot less destructive.

Every 3 months I get about $180 extra in from a sales tax rebate. This makes up for most things I need and then some.

Next month is December - I have about $25 extra I need to pay off for something and I want to get a 40 of cheep whiskey for Christmas and New Years Eve ($40). So there will be less fun money but what do I do? I go for coffee and order a $12 sub once a week.

There is however always something that manages to come up to eat the rest of the money I don't spend on other things. It literally never fails. I'll have to get some medication that is not covered or need to buy some underwear of some other random thing. Yes I have also ended up several times getting food for a friend who needs it. So no savings generally.

Here is the kicker for saving money in the bank. You need to have $1000 in the bank or they CHARGE YOU money for having too little in a savings account. Saving it in the checking account don't seem to work BTW - you end up forgetting you put it aside and spend it on something. The idea of having several hundred in cash in your sock drawer is not a good one either.

It also takes me a year to put away $200. Yes I do realize how freaking much I spend on entertainment. It does however come down to personal choice. I would rather have my entertainment and a couple fun nights out with friends a month than have a bunch of money set aside. So I end up saving nothing by choice.

The only kicker is when at the end of the month and I only have $5 in the back and I get hit for $100 for something - it hurts for the next month - but I still mange thanks to friends and good people. I help others when I can and I am bless to be helped by others when I need it. It's how life should work.

When I hit 65 and switch to the federal system there will however be a bit more money - but I have to live that long LOL. Have a good day all and keep smiling.

P.S. I typically spend $25 a month on my twice a week coffee outing. Also to be fare, I know many people making 3X or even 5X a month what I get and they don't manage to save a dime as well. Literally, they have no savings.