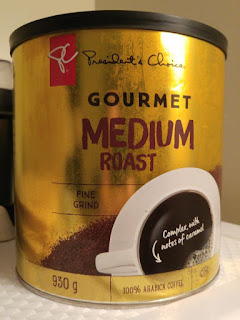 At first it was not bad just a bit bland. I can handle bland as long as it tastes and smells kind of like coffee. But there was an after taste that I can only describe as dish soap like. The after taste kept getting worse for some time after I drank the first cup.

I had a second cup and it was the same, that unpleasant after taste. Then I got heartburn out of it and it was rather unpleasant. So I ended up giving it to the ladies to use when they do BINGO night in the dinning room.

I ended up going to Walmart and getting some of the Nabob Full City Dark Roast that I like the best. Sure I am now out $12 for this coffee and I spent $17 for the replacement, but it's worth it to me.

To be honest, the exact same thing happened when I tried Maxwell House and Folgers. The only difference is both of them made me rather sick after drinking just one cup. This stuff did not make me sick - just the heartburn and unpleasant taste in my mouth.

Honestly I have to give it a 3/10 only. It does smell nice but the taste is very light and that after taste is just not something I ever want to have again. I hope the ladies like it when they do BINGO. I'd have taken it back if I did not stupidly toss out the receipt. Every time I have tried less expensive coffee it's been a disaster. So from now on, I'm sticking to what I know is good - even if it's kind of a lot of money.