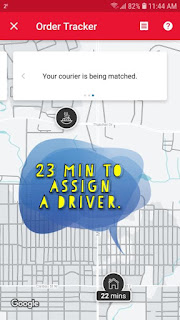 First you have to realize this city only has 33,000 people in it (about). Yes it was dinner time, but honestly... 23 minutes just to assign a delivery person to my order? Took a total of 53 minutes in the end. The estimate shown was wrong - took longer.

This is the 2nd time in a row I got a phone call from the driver not knowing what to do when they got here. So 2 separate people did not know to park the car and come into the building and enter my apartment number into the speaker thing.

This last guy had not one clue how to get to my apartment as well. I'm sorry, maybe you have an issue thinking it's the right building or what not, but how do you not know how the numbering system of 95% of the buildings on the planet works?

I told the guy what apartment a second time and he said "how do I get there". Now remember this, he was standing 5 feet from the elevators. So I told him to get in the elevator and come to my floor (gave him floor number).

So I'm watching him on the TV (there is a camera we can see the front door and elevators from on our TV). He is looking all over the place in a panic. He looked at the elevators several times. You can't tell me, you have no idea what an elevator is or what it looks like.

Both of the last 2 people I had to tell on the phone how to use the door buzzer as well. There is literally a list of people and instructions on how to use it. So...

The time before this I had a person never even get in their car after being assigned to my order. I sat here for an hour wondering when she was going to get in the car and go to the place I ordered from. Car never moved and for some reason it never switched automatically to a different driver and she never hit the button to pass it on to someone else. Just never did anything.

I went on chat with them and that took 45 minutes. They then sent a different person to go get my stuff and it was fine. He even knew enough to park his car in front of the building and use the buzzer and elevator - I was so freaking impressed.

See this is why I literally refuse to use the tip funtion when ordering something - I am not paying someone extra money to not handle it at all. If they do it right, they get a $2 coin from me. They can then cheat the system and not tell the government - but we won't encourage that now will we?

There has been a couple of other times it took a very long time to get my order and it bounced from driver to driver many times before someone went and got my food.

It does not seem to be a lack of drivers as there does seem to be many of them. It seems to be the lack of ability to do this talk for one reason or the other. Their system of assigning a driver seems to be flawed as well. There is also a massive reason I'll think twice before using Skip The Dishes again - there is NO way to cancel the order at any time. Trust me, you wait 1 hour 45 minutes for a driver to even go get your food you want to just skip it and make soup or something. So a cancel option before they pick it up would be a wonderful addition. There should be NO way to cancel after they pick it up - that would be abused.

There has also been several people on the Moose Jaw Facebook groups that claim to have ordered a large amount of food and it literally was never delivered. One even claims to have hit chat and the driver claimed to have delivered it. Others just literally never got there and so on. They paid for the meals and never got them - this can be taken with a grain of salt, as my friends and I have always got our stuff and had no issue like this - so who knows about these online stories of non delivery.

On a positive note, the delivery fee is not bad at all. Most of the time it's $2.95 and I can live with that. In a couple cases it's like $3.49 and I got no idea why. It does not seem to have anything to do with location.

When the service works, it's awesome and a good price for delivery. The only thing is they seem to take people who should literally not have this job as they do not have the skill set to do the task or they just don't want to always do it.

To sum it up, I probably will use them again for my once a week sub order - but I'm not quite happy with the service. That being said I'm not expecting much for the price of delivery. If it was more money I would expect better service to say the least. I recommend you tip manually with actual money instead of the auto-tip on the app or web page. This way when they feck it up sideways, you don't pay for bad service.

Take it or leave it with what I have told you.