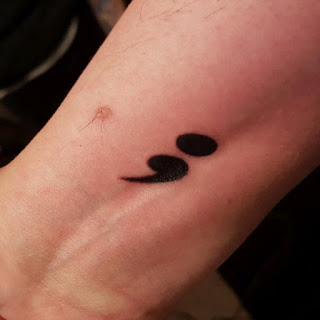 This is a common tattoo about mental health awareness. It's on the inside of my right arm by the wrist. Done yesterday by DNA Tattoo's. 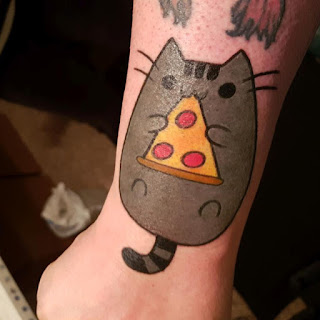 This is actually a Tattoo I have wanted for years but now had the money do to so.

Well I'm happy with the work to say the least. The line work is awesome and the coloring is great.

However, the estimate of time was 90 minutes when I chatted with her on messenger. It ended up being 5 hours. I'm glad we had a set price before hand with this - if it was by the hour I'd never be able to pay it off in a lifetime - sigh.

Also she put off  the time of it several times and I ended up going there at 8 PM only because I was expecting she knew how long it would take and it would be close to the expected time.

The other thing is, I have had 2 others done in the past that are bigger than this one. Well sure I was 30 years younger at the time (about) and my skill more resilient. But... She would whip down the aria with paper towel after every run or two of the needle. She also pressed rather harder than she needed to press to do this. The end result is 24 hours after we started this, I am still swollen up and it's still painful. The other two I had no pain the next day or any swelling.

I have to say 40% of the pain from this was when I planned it out, I knew the tail would be over my wrist onto my hand. This was a rather silly oversight on my part. I should have realized the skin folds there and it's going to be a bother every time I move my hand until it's healed.

Now believe it or not I've seen a lot of tattoos done in videos (see I'm a YouTube expert after all - I've seen videos) and I have to say every one of them - the fill work was done with much bigger circles. This may have been part of why it took so darn long.

I'm seriously happy with the work though. She was excellent at tattooing. Just the lingering swelling and pain that is an issue. OK the extreme time it took was also an issue for not only my time gone, but as for the person who grove me being pissed off it took so long - this is another blog.

Supposedly she has been doing this for some time now, so she would know about how long she will be. As well, she should realize all the rubbing hard on wounded skin is something you should not be doing. Oh well - if it manages to heal right and the tail is not messed up from the skin folding as it heals, I'll love this freaking thing for the rest of my life. The price was also right. I found it to be a good deal.

In the end I'd recommend her, but DO ask her to not rub so hard when she whips. Also plan on being there longer.