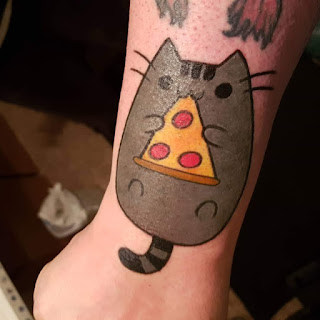 First shot is what it was supposed to look like. This is just after the sitting when it was done. Second shot is 9 days later.

There was overnight a very thick scab over the grey part. The day after that the scab was starting to ooze yellow slimy thick fluid.

Another day later the top of it was oozing some kind of brown stuff. I then went to the hospital. 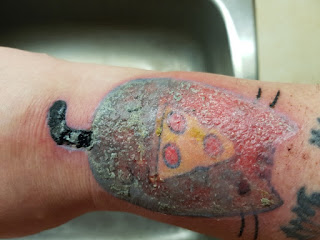 Not all the gunk is off of it yet and I'm not about to pick at it, it's messed up enough, but it appears all or most of the grey ink has come out and taken some of the black line work with it. The skin is obviously devastated where the grey ink was.

There is a lot of swelling yet but it's obvious that something has gone very very wrong. It's very selective in what it pushed out, so I have a hard time thinking infection is the issue. As well the damage to the skin is something that normally does NOT happen when the skin rejects the ink.

One of three things has happened that I can think of. There was an infection on my skin that was not killed when she cleaned the aria and it transferred to the rest of the grey when the did the fill work.

Second thought is, a massive allergic reaction to the ink. I've looked at many cased of this over the last while and not one of them shows the damage to the skin that I have.

Third thing I thought of is, the ink was contaminated with something. This does not make much sense either as others would have had this happen.

Now I have seen a recall of white ink (mixed with the black to make grey) for contamination. But I am doubting this.

Someone else said "maybe she went too deep" well if she was deep enough to do this kind of damage to my skin, there would have been blood running down my arm.

I'm simply at a loss to understand what went wrong. My money is on the allergic reaction. It makes the most sense of them all. An infection would have spread past the aria of the tattoo by now I would think and would have done more damage to the pizza in the middle of the tattoo. So I don't understand how it's infection.

People are telling me to take legal action. Well who the hell am I going to take to court? The artist was working out of her home and has nothing of value in her life, so I won't get anything out of her. The company? Well unless I get someone to work for free, I can't afford that shit - as well it would be endlessly in court for years to come and I literally might not live to see the end of it.

So no I'm just going to sit here and try to come to terms with the fact my arm is not visibly mutilated and that I will have to spend years telling people what the heck happened to me.

I just hope it does not turn into a bad case of skin cancer and I spend years fighting to stay alive dealing with endless medical treatments and slowly fading into the night.

I'm going to see my doctor tomorrow. With luck she will have something to say about the swab that was done on whatever that brown ooze was. If it is an infection I'll be kind of shocked. I would expect it to have spread more than this if it was such a strong bacteria it did this to my skin.

In hindsight, I should have paid more to have it done in a actual shop and not the attic of some young woman's parents house. The result may very well have been the same but there would have been some kind of insurance there.

After all, it's not like I have a bit of paper from her saying I paid her $180 to destroy my arm or anything. It was cash only. I'd ask for my money back at least, but to be honest - I don't think she has the ability to comprehend what is happening. I tried for almost an hour to explain it on messenger and she kept going on about putting coconut oil on it to save the ink. I literally told her the ink had been pushed out. Sigh. She was not understanding it. And if I had such trouble communicating with her before - I'd have skipped it.

In any event - now my tummy is upset all the time and I'm not sleeping. The meds they gave me done seem to agree with my tummy and well - understandably, this is messing with my head. So not much sleep at all.

This was done in Moose Jaw by the way. No I'm not saying the name of the outfit. Just be aware as hell, this is a possible outcome - I'm sure it's exceeding rare to have this happen though. But it can happen - you just saw the photos.