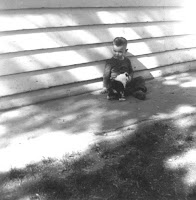 Me 2 years old playing with Corkie. The dog had razor blade teeth. My Brother and I played a bit rough with her and would end up bleeding. We did not care, but Mom would be mad at the dog and she would not know why Mom was upset.

She was also not that smart. Her days ended one sad afternoon when she got out of the yard and ran for it. Twice before she had been clipped by a car when escaping, but this time she was hit full on and that was it.

On a more funny note, Dad was getting ready for work one day (he was a cop) and she wanted out. So he let her out and then when she ran back in she bumped the door and it closed, clocking Dad out of the house as he did not have his keys.

As well, dad did not have his jacket, gloves or hat. It was the middle of winter and he could not wake any of us up for some reason so he started to walk to work. Well it was -20F at the time, so this was a silly move. But fortunately one of his co-workers saw him and picked him up.

Before her, we had "Penny" a black dog. I don't remember Penny  that well, I was not much more than 1 when she died and I only know her from photos. But Corkie lived long enough for her to be imprinted on my memory.