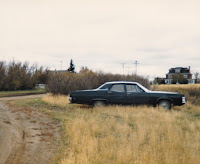 I live in Moose Jaw, Saskatchewan and the first out of town trips where to Regina to live it up in the bars there. Then I was off to Saskatoon for more of the same.

But one day a friend got tickets to an Iron Maiden concert, but it was in Winnipeg Manitoba. It's kind of a long way. Told the folks we where going camping and drove the ancient beast all the way there and back. We slept in the car over night and it was a hell of a concert.

The farthest I was in it, was New Orleans. It was a VERY long way from home. We stayed there for 2 weeks and lived out of the car for the most part. Being this was 1986, it was probably a bad time to be sleeping in your car in that city, but we made it and we got to see BB King playing in a small bar.

Did a lot of things with a lot of people in this car on sleepy back roads as well - young men are like that you see. I had the interior covered in "Funky Fur". Well one day after I was with a nice lady my age, I had to drive Dad to work. Well he found a red pubic hair in all that Funky Fur. I thought I was in for it, but he was cool with it. Mom would have lost her mind.

For a short time I owned an mid 70's LTD (forget the year) with a 460 in it with dual 4 barrel carbs. It was fast but too much money to run and it was short lived. Other then that I have not had a nice car to speak of other then when I inherited Dads land yacht - it was like driving in your living room but DANG it was hard on gas.

Now I have not driven a car in over 10 years and have not had a license to do so in that time. If I won the lotto maybe I would get my license back and go on a road trip all over Canada one summer. I miss the freedom of just being able to drive some place and do whatever. I also miss all the times Mom and I went to a drive-through and had burgers in the park - but life goes on.