HOW DO PEOPLE FALL FOR THIS STUFF? 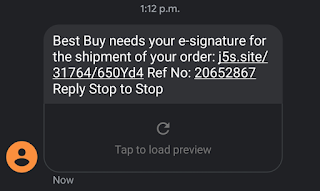 See I just doubt strongly that all the sudden Bestbuy changed their url to whatever the hell that is. j5s does not spell Bestbuy.

They just keep trying though, now don't they.

There has been a LOT of these money transfer crap things going around this last while as well. The sad thing is the same people keep falling for them over and over and losing money when they do.

Just so many people out there willing to screw over the next guy so they can have what they want. I never understood the criminal mind. I also never understood why people fall for this shit.

Then there is the share scams on Facebook and Twitter. Like and share this post for an equal share in the $30,000,000 winning lotto ticket. Right, think about it. The logistics of paying out money to thousands of people and well the stupidity of not wanting to keep at least half of it. Do you honestly think this is real?

I often wonder when people share this stuff do they also give out info they should not to try and get something for free?

Not to mention the obvious scams on Facebook you see as ads. "Cut your power bill in half". Well to be honest, plugging some thing in will take more power, not less power - just think about it. Sigh. But here we go, here is my credit card info... sigh.

There where actual health warnings issued by the government after a large number of people paid to receive toxic oil in the mail to "cure autism and cancer".  Like seriously? Do you honestly think some guy in his basement came up with a cure for cancer or autism?

FFS people even fell for the one that said to give a spoon full of bleach to their autistic child every day. Literally thousands of people do it. Read the fecking bottle! My GOD how stupid has humanity gotten.

I used to think people are dimmer now,  than ever before. The reality is people always fell for crap, but now with social media it's way more exposure to fake content and all too many people are under the impression that the fake stuff is removed instantly and it's all true if you see it.

We have done so many things in our time (humanity) and still we feed a child bleach because the internet said it will magically fix them.

Here is an example from the past. There was a thing in the 1980s and 1990s where people would drink their own pee because it showed up in some magazine that it was healthy for you. Hell people in the 1990s even paid $20 to drink 1ok of horse semen because they thought it would make them better in bed that night. So year, people are NOT getting dumber, they are the same.