I Used To Adore My Commodore 64 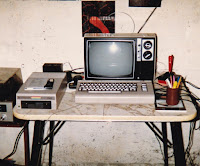 I did used to adore my Commodore 64. I got it in the 1980's and kept using it for a long time. This is a photo of it when I first got it. I honestly don't remember when I got rid of it but it was in the early 2000 range I think.

I learned 65802 assembly code and wrote my own educational games with it. They where distributed among schools in a region for free.

There was also the popular "Demo" programs that would show off the capability of the machine. It was a must to know assembly code for this as basic was not nearly fast enough to do most of the fancy tricks.

A little history on the machine. They came out in 1982 as a home computer and where actually kind of expensive in the day for what you got, but it had 16 colors on it's display and that made it popular. That's right 16.

They sold somewhere between 22 million and 30 million according to the man who invented it. It is to this day the most popular personal computer in history. It is estimated that there are around 5 million still being used.

Mostly the computer was used for gaming and there where a vast number of games avalable for the system. Strangely enough, there have recently been a small number of games released for C64 emulators that never existed in the time the C64 was popular.

Most of my friends had one and we used to trade games and share copies of share-ware programs like Sid Player and the music that was played on it. I remember actually having over 100 disks of stuff I had typed in from magazines like Computer or had made myself or had received copies of from friends.

In the height of it's popularity was GEOS a graphic environment operating system. One of the first of it's kind. It was not all that powerful and you needed a memory expander to use it properly. Also GEOS was rather expensive for the time.

At my peek, I had 2 disk drives and a 512KB memory epander and a "super snapshot" cartridge for it.

In the end I ended up giving it away because I had moved on to a 486 that I got for not much money.

As for mods, I had added on a second Sid Chip (sound interface device) to make it stereo. I had also modified the drives to run 5 times faster. I had also made my own power supply for it as the ones that came with it where not fixable and would not live that long.

I actually do miss the days I was happily playing with this 8 bit device. It was a simple time to be alive and all was right with the world. I did not have the worries I did today and the low quality of the graphics and limited memory did not stop us from having a great deal of fun with it. We would spend hours playing games and just enjoying the day.