YOU'RE NOT THE FUC**ARD WHISPERER, DON'T WORRY ABOUT IT 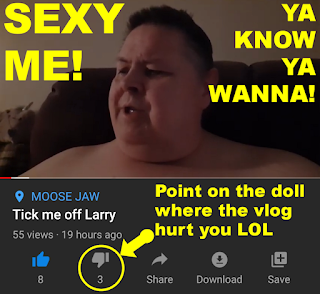 OK I don't tend to bother looking at how many dislikes a video has for the simple reason I'm not a sheep and want to make my own mind up. This screen cap was sent to me from a friend noting the 3 dislikes. So I had to have fun with it. Just remember when people use sock accounts to do this, they are reacting like a toddler who was just told no. There is also an extremely high chance they are jealous as hell of you. Only a person mental problems becomes abscessed with some random person on the internet like this. You're not the fucktard whisperer, so don't bother to try and fix someone else's mental illness. Just know, it's not you causing this, it's their inability to deal with reality and control their own urges.