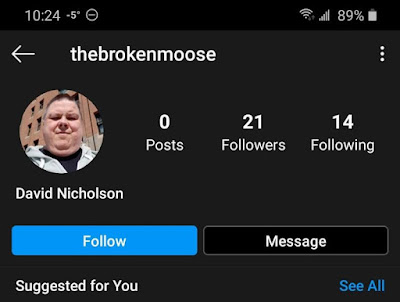 Here is how it goes. I wanted to keep my LGBTQIA+ following separate from my other daily stuff. So I spawned an extra profile on my original account (linked account). It is MJART66. Well I had a lot of issues with it when I switched from one to the other. It would unlink my from Facebook and I'd have to log in and verify every time I switched. This was a pain in the ass.

So what I tried to do was to get the MJART66 channel on my tablet. There was no way in hell this was going to happen for some reason. It just would not allow me to do it. When I tried to add it it wanted my password and it kept saying it was wrong. Well it was not wrong as I logged out of the AxeMoose channel and back in and the password worked. So why the hell the second channel for that account won't add I don't know.

So I gave the hell up and spawned this one with my backup Facebook account. What a total bother. To top it off it seems I can't remove the MJART66 one without removing AxeMoose and I don't want to do that. So it's sitting there unused for the rest of time I guess.

So now after saying "I will never have a second account I have three of the dang things". The thing is, I'll never follow people I know with these other accounts and I told them not to follow it. The follows you see on this one are people I followed following back and others who are related to the ones I followed trying to get me to follow back by following me. Well that was a mouthful. Anyway, three freaking accounts. Kind of wish we just had "Lists" so we could keep it all organized on one profile, but NOPE.

Remember, I won't be posting on these and recommend you don't follow them. If another account claiming to be me follows you and you're my friend now, it's NOT ME.

Could be worse, a friend accidently made a second linked YouTube account and in removing it wiped out his original channel. I had a "brand account" for a bit on YT but when I deleted it, I did not managed to destroy the AxeMoose channel.