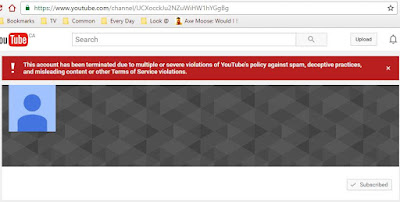 The YouTube agenda to make people conform has taken another channel I see. All I can think is that he said fuck too much - sigh. Someone said it was about "misleading video titles". Sigh. For one thing what kind of butt-hurt FUCK-PER-BRAINS would you have to be to flag for that and the other thing is, the big names do it literally every other video and nothing is ever done about it. If I had $5 for ever time some big name tubber had a misleading thumbnail or a video title that had jack shit to do about the actual content I would own my own fucking house. I'm starting to get tired as hell of YouTube and this crap they keep doing. Absolute bull-shit. Meanwhile some cunt trying to literally sell you the plans for "free energy generator" for $3500 USD has had the fucking video up for 6 years. That is not a scam at all now is it... Sigh... So the fuck what if the title of some video is not 100% what the video is about. When it happens to me or the thumbnail draws me in for and I get scammed - I laugh it off and move the fuck on to the next video. But we can't expect anyone to get the fuck over anything. Hell I got one set to "adult content" after I said Fuck 5 or 6 times in it. Another one got marked because I had my shirt off - I did NOT even show a nipple. God fucking hell YouTube. But then again we are talking about the same company that took away monetization for ALL the videos a women did who talked about how to service rape and how to live with the trauma. We can't have that shit on the interwebs now can we... SIGH... FUCK.