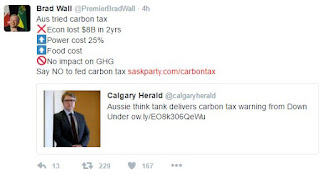 In this post Brad Wall admits that food prices are up. This is interesting because he also recently gave the go ahead to cut over 2000 people's disability benefits on the grounds that there is now more housing to chose from. The reality that the price for housing has NOT gone down due to this new availability to rent seems to be lost on his government. So rent is still the same price and moving won't fix that for you, you will still be paying high rent some place else. The price of food keeps climbing and benefits go down instead of up. All this to save a very small amount of money for a government that is handing out money to businesses right, left and centre. The same government that ended up spending almost twice what they budgeted. The same government who then offered a class on how to be responsible with your money to the poor people they cut benefits to. It deeply makes me question the ability of the Sask Party to run the province.