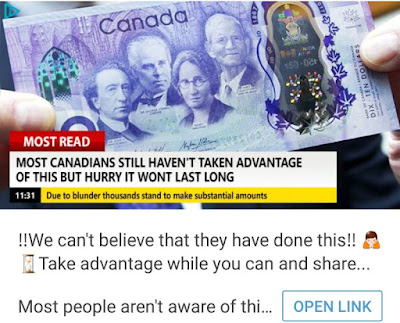 This has been all over social media as a sponsored post. There is literally no information other than the OBVIOUS trick to get you to click the link. At best it's a scam and they want you to send them money - at worst it's going to end in your hard drive encrypted and a demand for money.

The thing is - this WORKS. This is how a great deal of virus get installed because you CLICKED IT. It is also how you end up sending someone in the middle of Russia a credit card number.

People want things. People want money to get things. So they see this crap and thing "OOO free money" and never think. The part that every other time they got ripped off it looked like a "news article" does not seem to stick in their minds at all.

BTW I hit the VPN and refreshed and the same ad came up with the same graphic with a US $10 bill.

They make you think that some company or the government made a mistake and you can get things from them - Ya know... Even if that was true, it's not honest to do it. So your greed and dishonesty will bite you in the ass on this.

The worst part of it is, the same people keep falling for the same scams over and over trying to get stuff. They don't seem to have the ability to learn from mistakes at all.

Also this goes to show how LITTLE that most sites care about what is being posted on them. They stay up for weeks sometimes before they get taken down. Hell Facebook tried to sell me penis enlargement for 5 different accounts who paid to have the contend seen. TOS violation and no one noticed... Sigh.

Just think people, nothing is free and the people posting these want you to give them things - you won't get things back.