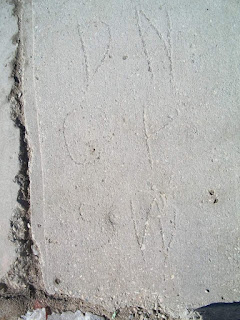 So this is something two friends and I did a LONG time ago. We must not have been more than 10 at the time. That in it's self shows how times have changed as this is 3/4 of a mile from where we lived at the time and if you let your kids wonder that far now alone - the cops show up.

Anyways the guy who had just finished smoothing it out actually told us we could do it. Something else you would not see today I'm sure.

You can easily see mine at the top, but the other 2 are worse for wear. At the bottom our paranoid friend was sure the cops would show up at his door any moment if he put his actual initials, so he put them upside down and backwards. Sigh. Not like he was the only person EVER to live here with his initials or anything, but ya know.

Cut 39 years later, I was shocked it was still there at all. This is the entry way to a very used ally way. I thought it would have worn off a hell of a long time ago as none of us went that deep.

Best thing is I bet almost no one ever noticed it. I only saw it because I looked for it. I just happened to be in that spot at the time and took the shot. This is several years after that and no idea if it's been replaced by now or not, but who knows - maybe it will out live me.

As for those friends, one is dead and I no longer talk to the other one - have not for a few years now.

If I had the ability to know how I would think in the future, I'd never have done this in the first place. But there it is a shining monument to 10 year old male thinking.