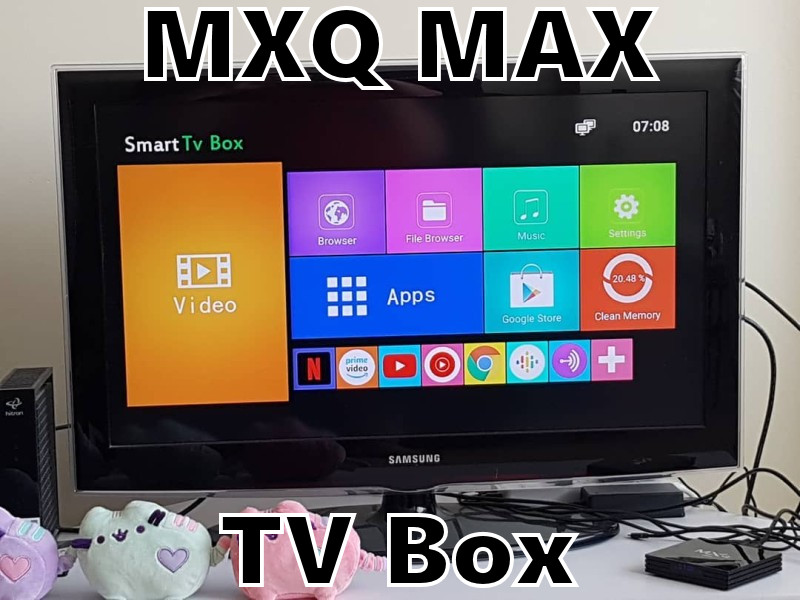 *** IMPORTANT UPDATE ***
After allowing the box to update it's own apps, several of them no longer work. This includes Netflix. This makes the box useless and I'm sending it back for a refund. I recommend you don't waste your money on the product.

That little black box in the lower right corner of the image is my MXQ Max TV box. It is the 2019 version and is running Android 8.1. It comes with a simple browser that I immediately replaced with Chrome. It also comes with Netflix, YouTube and Prime Video. These apps are native to the box and not the normal ones you find on the play store for tablet or phone.

On first inspection it's easy to set up, although it's a serious pain in the ass to sign into your Goggle account and your streaming services with just the remote. You might actually want to spend $20 and get the wireless keyboard with it. It will plug in (the dongle) at the back of the box on the black USB port. The blue one you want to leave open for USB 3.0 drives and so on.

All that being said, I did not get the keyboard as I will only have to enter passwords and emails once on the device, so I don't care to have one. As for searching, my Netflix, YouTube and Prime all have more than one stream available at the same time, so I can fire up the phone and add things to the watch lists.

It seems east to cast to the device if it's turned on and was easy to pair my Bluetooth headphones to it as well. You can then turn down the volume on the TV all the way and watch your shows or movies at 3am and not keep anyone up - Mute is not an option as it puts that stupid icon on the screen of the TV and distracts you LOL.

It can actually be paired with more than one device as well, so a Bluetooth keyboard should work with it - not actually tried it though.

This review is at the start of use. I will follow up in a week or two with how it works for streaming hours on end.

I do fully have the expectation that at least once a month I will have to power cycle the box. That is to say unplug it then plug it back in to reset the box and clear out anything in memory that is cluttering it up. It does have a cleaning tool however, but they don't always work and literally every Android device I have ever owned will need a reset now and then to keep functioning properly. My phone has a cleaner as well, but I still have to reset it now and then.

The box was $89.99 and has no tax on it at point of sale. There was a $15 off very limited time coupon with it so I picked it up now instead of at the start of April as I was originally planning. This makes me short on money in March, but it's worth it as I will save on the box this way.

It is easy enough to use with just the remote, however I had to several times turn on the pointer (there is a button on the remote for that) to be able to actually click the right things. The pointer is a bit of a pain in the ass, but it is functional. Again, with the keyboard that is recommended for it - there is a touch pad that will make life a lot more simple if you get that.

The remote does NOT come with batteries, and it literally says that. There is always someone who will complain there is no batteries even though they where told it has none. You will need 2 AAA batteries for it. I had to rob them from another device and order some from Amazon for later. Then I'll be able to put batteries in several other devices that need fresh AAA's by now.

You will almost certainly need to set the video settings to make the zoom fit your TV properly. I've set up several of these for friends in the past and had one years ago that was way less powerful than this one and they ALL needed to be zoomed out exactly 2 clicks. If you don't do this the pointer will go off the edge of the screen and some functions will be hidden in the play store for example.

Yes there are only 2 USB ports, but how many do you need? I've never seen the point of having 4 or 6 ports on a streaming box. The USB 3.0 can be used with a hard drive to stream movies off of it with ease.

There is also an SD HD card slot on the back. I literally have no idea what the limitations of the card size is, but I'm assuming 32 as it seems almost all the others limit you to 32 GB. If I'm wrong about that you you know it, let me know in the comments.

There is 4GB of ram so you should not run it our of ram or have Prime fail to stream as you run it our of memory - I'm told some of the smaller boxes will have that happen now and then.

There is 64GB of storage so you can have a vast amount of apps stored on the box or download music and/or movies onto it to watch.

I am using it wired to the modem with a Cat 6 cable as it only has 2.4 ghz WiFi and I do NOT run that band on my modem as there is a vast amount of interference in my building on that band. Being the modem is on the same stand as it, it's not a problem and it was $6 for a cable as an add-on from Amazon Basics. If you do NOT live in an apartment, you will more than likely have no issues at all with 2.4 ghz band. But be warned the keybord with the USB dongle is on the same band if you use it - so are literally every wireless device for you laptop or PC that is not Bluetooth.

The Blutooth is 4.1 and will easily run several devices at once.

The Processor for this box is a Cortex-A35 Quad Core and will easily run anything you need to run including games. You can pair it to the phone to play games BTW. Just don't ask me how - I don't play games.

There is also a SPDIF and AV port on the back for old style video connectivity and plugging it into a sound bar.

The big minus is it's does not come with the fancy keyboard remote and the card reader is almost hidden. You WILL have to look close for it - it is marked "TF" and is beside the USB ports on the side.

It does have a display on the front and it's too small for me to see from my chair so I can't at this moment tell you if it's a clock or time count for streams.

First day rating of the box is 4/5. I'd have given it a 5 if they game me a keyboard remote with it for the vast amount of money I payed for it.

Note: Yes you can pay a lot less for a box, but if it stalls out and crashes the prime app or Netflix app because you ran it out of memory, you know why. I'm also seeing in the Amazon reviews people like it for games. Still not one clue as to the max size for the card slot.