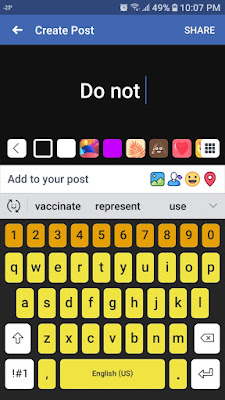 This actually made me forget what I was going to post on Facebook. I type in "Do no" and the first recommendation is "vaccinate".

So tell me, is google part of the conspiracy to destroy the lives of a generation of children through ignorant bullshit that has been proven WRONG 1000 times already, yet these people still won't listen because they saw a blog post or two?

Or is it that so dang many people have typed in "Do not vaccinate" that it is in the top 3 suggestions? I'm kind of thinking this is the reason - so many typing it.

After all why would a company that wants to make money off of every person on the planet with an internet connection, want to all the sudden reduce the population or at least impair them to the point they won't be needing the internet?

Such a sign of the times. People have gone off the wagon as it where brain power wise. They are willing to ignore reality, facts, proof and believe in wild tales told by people who should not be untended too long.

Seems the new way of thinking is that if you don't like what someone is saying, then just go along with some group of fools who think like you and forget science. After all in these peoples minds science is not factual and is trying to harm people for the government. Why they hell they are doing that is anyone's guess as none of them make sense when they answer me.

And if the Autism web page says vaccines don't cause autism, these same people say it's been taken over by big pharma to try and cause autism, so they can make money treating it. Tell me that makes any sense.

Of course, the world is flat and the moon is not real. All references (millions of them) in literature and historical documents where placed there to fool you so the government can control you some how - how this works not one person alive knows - but it's reality to these people.

Plane flies over and leaves a vapor trail - they are spraying you with chemicals that either make you aggressive or docile - depends on the mood of the person saying it I think. They one for this is "when I was a kid I did not see chem trails - they are new". Sigh see back in the early days plains did not on average fly at the height they do now - but that makes logical sense - so it must be ignored.

Hell there is even a large amount of people who claim a dog can not look up and if you show them video "it's CGI by the government". This one is even more twisted than the flat earth one to me. Why the crap is the government faking if a dog can look up or not?

The latest one I saw is that a very popular music app on cell phones is giving away the personal data of your child to anyone who has the app. Now the fact that you can open the FREAKING APP and look for this feature and never find is should shut this up but it does NOT. The post then goes on to say that her daughter was "texted" her personal information "where she lived, her real name, her age, where she goes to school". Here is the best part for me - they then take the phone to Verizon instead of the COPS about this threat to their child's safety. Then the sails man in the phone store somehow knows about how dangerous the app is and tells her all of this crap. See if my kid gets a text like that, I'm off to the police, not a guy who sells phones for a living.

Good lord. BTW keep sending me "share this for a chance to win" crap in my inbox, I love this fake waste of time crap.

While I'm at it, if your post tries to shame me into sharing it - I'ma keep scrolling.

I'm going to end with "I bet this blog does not get even one share, as the government is trying to keep me quiet".