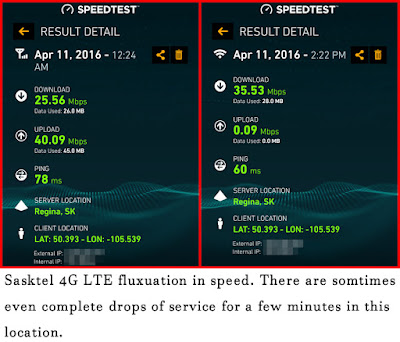 Kind of speaks for it's self. It's fast as hell when it's not acting up, but in my location it seems to act up often. More than often it's the upload speed that drops way the hell out. Also seems any place in Regina is faster up and down. There are also spots on the highway that their map says is covered in LTE speed that are far from it. I expect it to drop low or right out when I am off in the woods or down a back road, but when I am on a major highway I kind of expect to have good service. My phone has also dropped calls in my apartment and being that I am literally 1/2 a block from the cell tower, I kind of wonder some times.