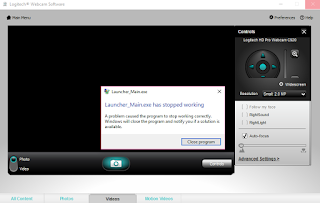 So yuppers two updates AFTER the big ass update to the Anniversary edition and the web cam still won't play on ANYTHING but the windows 10 photo app. Run Skype CRASH, run my recording software CRASH, try to go live on YT CRASH. Sigh.

So the idea of "Mpeg is not fast enough of a format for slower computers" was a great idea. Sigh, never mind that literally everything out there uses it as the standard. Sigh... So now even after several updates the most common web cam on the market don't work. Neither do about any web cams out there. But for once in their entire existence MS is looking out for the older systems. Ya know - them slower old models that literally can't run windows 10. Them being the only ones who would have a problem capturing 1080p video off the webcam. Sigh. So if I can think of this being over the top stupid and literally every blog post or news article I have seen thinking it is stupid - some how MS thinks it's the best idea ever.

So literally anyone out there who relied on the web cam is now toast. No more video conference for you all. I can literally feel the air change as millions of businesses switch to Mac so they can be rid of the world of stupid that is MS development. Seems when someone at Apple is found to be too dumb to do the job they just send them over to Micro$oft.

Mind the photo, it's shot through a very dirty window. I opened my blinds and there was this fire truck at the Moose Jaw Church of God. Got no idea, probably a fire alarm went off. By the time I got outside in the freezing cold, it was gone, so no better shots.
Read more