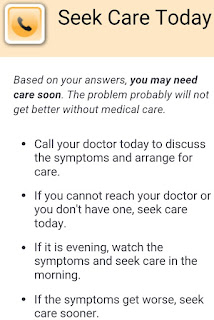 So went over to Sask Health web page any put in my symptoms and it came out with this. I kind of wonder if it just always says this to cover their ass so to speak. I did not go and the next day I was fine but I felt like hell for 4 days at the time I did this. Flue like kind of thing. I know what would happen. Two hours in a waiting room, 5 hours in an ER room and then told "you have the flue go home" - so why bother going in. After all this is the same hospital that sent my friend and former building manger home two times with a bunch of broken ribs and a featured spine. The second time putting a soft brace on his back. After he had a heart attack and was sent to Regina they realised he has the injuries and treated them. It was all for not though as he only lasted a couple of weeks and passed away. I have to wonder if it was from the injury to his chest and it not being treated. Sigh.

Mind the photo, it's shot through a very dirty window. I opened my blinds and there was this fire truck at the Moose Jaw Church of God. Got no idea, probably a fire alarm went off. By the time I got outside in the freezing cold, it was gone, so no better shots.
Read more