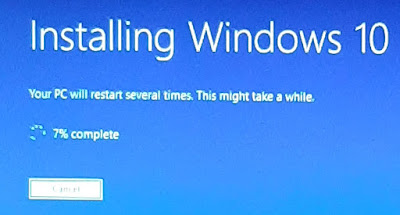 Well that freaking worked. Well there was an update that KILLED the update feature in Windows 10 recently (5/12/2020). You may want to go to settings then updates and check updates. If it tosses you some freaking error it's had the bun basically.

So I tried it all. I enabled the administrator account then tried to update from it - NOPE. I tried to use PowerShell to rebuild the Image - NOPE. I tried the registry patch from Microsoft - NOPE. I cleaned up the files with the drive cleaner including the update files - NOPE.

What I had to do is download the media tool and run it then say "update now" then do what it says basically. Took FOREVER as I don't have an SSD - I've got a slow HDD. Then after that I had to update and I noticed it DID NOT install the broken one - in fact I think it's been removed from the list.

This leaves you with a shit pile of old files you literally CAN'T remove by just deleting the "windows.old" folder. You have to pull up properties on the boot drive then hit the clean Disk Cleanup box. In it click "clean up system files" then go have coffee - it will chew on it a while. There is a box for updates and one for old versions - click them and it will ditch the crap pile of old windows files.

BTW if you need to do this - literally book an afternoon to do it unless you have a fast system with a fast drive then it should not be so freaking long.