STUFFED TOYS, GHOSTS, AND A UFO 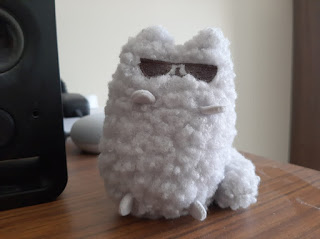 This is Stormy Cat. It's Pusheen's sister Stormy. I call her Stormy Cat. Well normally she is lined up nice with my speaker and facing north square on. However for some reason she moves around a bit when I'm sleeping. I'll get up and she will not be in the same place and/or rotated a bit. One day I was sitting at the computer and messing with my phone and saw movement out of the corner of my eye - she had rotated 90 degrees.

I have no valid explanation of what the hell is going on with her. However I feel there is a spirit in my apartment. Yes I know it's not a rational thing to think but there it is. A ghost is basically a recording of an event that plays back. A spirit is a thinking entity (simple however). The next level is demons and angles kind of things. Yes I know most people don't believe this stuff. However I have been part of 2 sightings of ghost activity when I was NOT alone.

First there was 3 of us in the evening at the golf course. I was about 8 or 9 at the time. We where on our bikes on the road that goes in the middle of the golf course (it's cut in half by the road). There was this stone foundation on the west side of the road about 300 feet away. We saw at the edge of it a woman in white standing holding a baby.

Many years later I found the story. There was a cabin there before Moose Jaw was even a whistle stop for the trains. It was the middle of a bad winter and the baby was sick. The man went to get the neighbor and was lost in the snow. The woman and the baby perished in a fire. It's a good story but if the man never got to the neighbors, how the hell do we know the baby was sick? The rest can easily be true as it would be obvious when the remains where found.

The 2nd one was a green orb about the size of a basket ball that went across a field and there was the sound of someone crying. There was about 12 of us there at the time. This one was in full on daylight. We had just started the fire and where about to get into our beer. I think I was around 17 at the time. Never found out a story about this one.

There was one other thing I experienced in a group. There was around 40 of us on the hill looking into the valley where the fireworks where being set off. I was taking photos and so was another man. We had our cameras powered up and in our hands. Well a classic 1950's UFO appeared and was rotating. Many of the people had cell phones as well.

It's interesting to note that not one of us took a photo of the thing. There was also no sound that could be heard over the music booming out of the valley.

This can full on be passed off. The object appeared to be small and could easily been a drone of some kind.

O.S. Nothing else gets moved in my apartment, just Stormy Cat. I also have woken up with scratches one me several times and had the place "cleaned" and the bad spirit chased out, leaving the good one.