5 SHORT STORIES ABOUT MYSELF 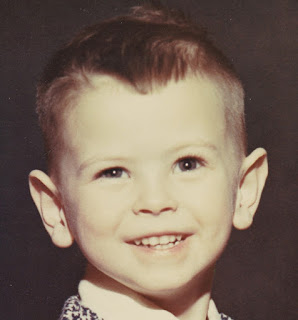 I was 11 months old when I was adopted by my parents. I never once wanted to know who my biological parents where. I never once wanted to see them. I am told I was able to talk not long after that. The only thing I really remember from those days when we lived in this little house was the kitchen and a book shelf. The clearest memory was of when we where selling the house and I was afraid I would never see my friends again. Turned out we did not move far and a couple of the friends form those days I still communicate with today. (I'm 2 in the photo.)

Sometimes we fall in love with the idea of being in love. I know I have many times. Yet actually being in love for me never lasted long and now I can't imagine sharing my life with someone that closely. Honest to God right now I think I would chose having a dog over a spouse.

As a child I had a great deal of energy. When I was 9 I fractured my spine and ended up in a body cast for months. I gained a bit of weight after that - actually more than a little for someone my age at the time. After the cast was off I went back to being as active as I used to be, yet the weight never came off. Later on I hurt my back badly once again and it never came back from that one. I ended up sedentary and over the decades to come almost hit 500 lbs.

A friend and I drove 1945 miles to be in the Big Easy for 2 weeks. We lived in the freaking car in the middle of summer in a climate we where not ready to experience. It was so dang hot. It was also the most dangerous time in history to be in the Big Easy. On the way we popped over to where they filmed deliverance. Got stopped by some obviously racist cops on the way. We where stupid to do this in a half dead car, but it was the experience of a lifetime and nothing I am able to do now will top it. Hell even if I won the lotto, nothing will top that one.

When I was taking care of my Mother just before she went into the care home to die of cancer, I was in constant pain that never went below a 5. Some days it was all I could do to help her and when I got home I laid in bed and wondered how the hell I could keep going on like this. All I knew is I had to do it and I could not stop and I could never let her know how much pain it caused me. I think she never noticed as by then she was mentally not all with it and quite focused on her own problems. That being said the worst pain I experienced in that time was watching my beloved Mother slowly go from a vibrant old lady into a shell of what she was, unable to see and hear and when she died it was a relief. Nothing will ever match the pain of that, noting can.