MY HERNIA SURGERY DID NOT GO AS I HOPED 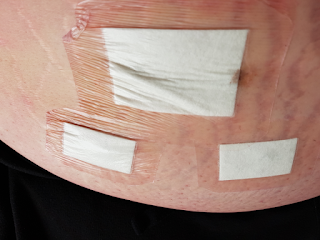 Well I had an operation. They punched a bunch of holes in me and stitched up a very large hernia and installed a mesh over top of it to help keep it all in place.

This is the second time they repaired one in the aria. The first one was very small and they did it the old fashioned way by cutting me open and installing the mesh. It failed in a few years.

When it failed, it ripped me open from the centre to the left side almost all the way over. It was the size of a cantaloupe. My insides stuck out about 2 inches when I stood up.

I have to say even with fibromyalgia flairs, I have never felt pain like this in my life. The pain was indescribable. I was screaming as I was putting on my clothing. I seriously doubt they had given me any pain medication when they put me out or after that. They said I had two doses of it in my IV.

If I had had the pain meds shot into me, I would not have been screaming in pain. When I had the main meds orally at home and they kicked in, the pain was to a point I could do things and only sneer a little from the pain, no screaming. This leads me to think I was not given any actual pain medication in the hospital at all, they just said they did it.

Then came the side effects. See the first time I had a catheter in. This allowed the pee to drain out of me and I did not have to get out of bed. Well now that I was sent home (alone) I had no catheter in me. So I found out that same night, I could not pee.

So my best friend in the world who was staying with me overnight, took me to the ER and they drained over 900ml of pee out of me (900ml = 30.4 oz). So that was a lot of pee. They said it would take a while for the bladder to work normally. The next afternoon it was working again on it's own but slower than normal. That night it was back to normal.

Then I got plugged completely up by the pain meds they gave me. I was impacted. There was literally no way I could pass this rock hard poop. I had been taking a tome of stool softener the entire time, but it had not effected the rock hard poop in me.

This was extremely painful. To the point it was almost as bad as when I was getting dressed the day of the surgery. The pain was unbearable. You can't press hard you see, or you will rip yourself open again. So back to the ER.

I had to pull down my pants and roll on my side. Both where painful tasks to me in my state and on the very narrow bed they have for you in the ER (not to mention short bed). So I cried out in pain several times and got onto my side (had stopped taking pain meds at this point - I realized they did this to me).

The doctor then sticks a finger in my rectum and says "yup, it's rock hard". There is a joke there involving my sexuality, but I'll keep it clean(ish). He then inserts two pointer finger sized objects into my rectum. He then tells me "hold it for 30 minutes".

The immediate feeling was that I had to poop even more than I already did. But I held it in for 30 very long minutes. I then went next door to the (thank god it was open) bathroom and blew it all out. It took only a few seconds to clear me out, but when I went to flush, this pile the size of a house cat was looking back at me. Literally said out loud "Holly shit".

It had left me with diverticulosis pain ever since. I also spent the entire night draining out a pile of poop that was liquefied by the pile of softeners I took.

Now onto a side effect that is extremely uncommon and actually hard to even find on the internet. The inability to orgasm or climax. It's been 5 days now and although the pain is nominal even with no pain meds, I can't get off to save my life.

But to me the inability to get off is almost as bad as the pain was to me. This sounds incredibly selfish I am sure, but it is kind of important to me.

See I knew about the impacted bowel thing being an effect of the meds, I also knew about the not being able to pee thing being possible - but NOT this. I'm kind of sure there are men out there that would say "just let me die" is they knew this would happen.

As I contemplate having lunch before I go out for coffee today, I have to finish off with - this has been a very big pain in my ass for 5 solid days. But I am no longer at serious risk from the bulging hernia. I just hope that this one lasts longer and I don't have to go through this again in a few years.

BTW in total I have 10 bandages on me and 11 holes - two are close to each other. At this time the pain is like a 3 or a 4, it's nominal. 3 is my baseline for chronic pain BTW, so it's all good. That being said, there is this burning itch on every last hole they punched in me. It's the last bit of hell I hope.

Oh one last thing, the medication that messed me over so bad, did not work that well, it only took the edge off. See I'm extremely resistant to pain medication and it's not possible to get a doctor to understand this. My nurse friend (retired) gets this 100%, but not any doctor EVER has understood it.

The medication was also $70 out of pocket and I don't have the money, so my friend had to pay for it and I have to give her son the money when I get paid. It's all good, because I go for coffee with him twice a week and I get paid on coffee day. But DANG $70 to someone who lives on $1088 a month and pays $423 in rent (subsidized), is a bother. 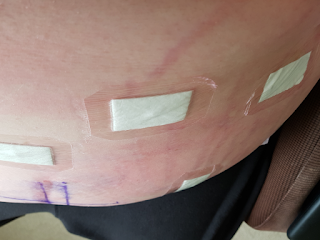 Well I am done with my story of my operation and everything. I do have to say though, the staff that where involved in getting me ready and getting me back out the door where great. They where all friendly and helpful. I can't speak of the staff in the OR, as I was out like a light the entire time, but evidently they did a good job - other than I'm kind of sure I got not one but of pain meds from them. So my hats off to the nurses and aids that work in day surgery.