BEING THERE WHEN PEOPLE BLEW SHIT UP

April 18, 2020
So many years ago in a time when children where free range, my brother and I got into some fireworks. I have to say it was more than a little dangerous to let kids like us play with stuff like that. But anyway. We where out west in a mining town in B.C. Canada at the time. We lit off a few small rockets and watched them pop. My brother lights the last of them and it falls on it's side and shoots off over the road buzzing a car. Well it was an RCMP car and we took off into the bush. We never got found out for that one and Dad being a cop would have been so impressed that my brother had loaded a bunch of fireworks into his bag when we where in the USA and smuggled them over the line.

Cut to a few years later and I'm a bit older but not much wiser. Still in elementary school BTW. A friend took some gun powder from his dads amo loading station (should have been locked up but oh well) and we out some in a small bit of copper pile (small gauge) and crimped the ends. Well he tossed it in the fire and it made a pop like a .22 being shot off. So we loaded a much longer bit of copper pipe and crimped the ends. He tosses it in the fire and BANG it trows burning bits of wood all over the back hard and his dad comes running out and flips out on him. Well my dad was told and I got a talking to as well.

Now cut to high school and a friend who telecom hacked got us a free long distance line to Germany and a rather sizable B.B.S. (bulletin board system). There was this text file section with things that where not legal to own in Canada at the time. To be honest it's extremely easy to get now that the internet is rampant. Well we follow one of the recopies and make this stuff that won't stop burning when you put water on it, in fact it makes it worse. Then there was the bomb. This is one of the top 10 stupidest things we ever did. BTW the guy who mixed it all up and set it off is no longer alive and it's not a shock to any who knew him. Well it says it will make a 3 foot wide hole if you bury all but the top of it and light it then fuck off to cover. Well... that was not the case. This freaking thing goes off and digs a dole 5 foot wide and 2 foot deep sending dirt and rocks flying for 100 feet in all directions. We decided at this point in time to just delete the text files and leave it be.

Now I'm still in high school, just a grade up. My brother decides he is going to steal a box of "thunder flashes" from camp Dundurn. To this day I'm fucking amazed at how much shit went missing up there and nothing was ever said about it. But anyways. See these have this cap on them and you light it like a road flair. It will also float in water and not go out. Well it makes a rather impressive band when it goes off. Also some fish end up floating on the water. The stream did not have many fish so we did not do much damage to their population at the time. Then he set one off in the yard. Dad was fucked off to say the least and people came running to see what had happened. The lawn took some time to heal BTW.

Now I'm in trade school and a friend has made this jell explosive. By this time in my life I'm wise to the fact you should not fuck with this stuff unless your trained. But he decides to put it on the hood of his truck and shoot at it. See it's not that stable and can be set off by an impact he tells us. Well I guess he had no idea how much bang for the buck it had and that it would rain fire on his truck. Like the other stuff from my past water did about nothing to help put it out and helped it spread. Took some time to get the fire out and the truck although still driveable looked like it had been lit on fire, because it had been.

Cut to my 30's and I run into this woman over the line in Montana. She had this thing where she put copper sheets on the ground and put a pattern of det cord then set it off. This was one of the coolest ways to make art I've ever seen and could not believe it was legal. It left a mark on the copper (a dent and discoloration). I to this day have no idea who would buy these things but she told me she sold them.

Now lets cut back to me being in my 20's and a friend and I sitting by the fire in the park. Well he has this can of carbout in his car. He tosses it into the fire and we bugger off. It makes this squealing sound and he thinks that's all it's going to do. Well he goes back to the fire and the two of us still far back tell him that's not a good idea. Well he is one to never listen to anyone so BANG it goes and shoots sparks all over him and he is flash blind. Well he's looking of to the right of me into the darkness and not at me or my other friend. He comes out with "are there any holes in me"? Well we burst out laughing (he was perfectly fine BTW). He then yells, "am I bleeding". More laughter. Well then we all load into the car and off we go so no one comes and give the moron a ticket.

Same moron different day (same summer). We are camping and we are drinking out of a bottle of Rye and he once again tosses a can in the fire. This time we are in a populated aria (camp ground). Well it blows up and goes flying into the camp behind us over the trees. Well they don't take kindly to this and go to the office and report us. Well they send the RCMP out and my friend sees the cop car threw the trees and tosses the bottle over his shoulder into the trees. You see there was a ban on booze in this park. Well the cop asks if we saw anything funny and he says "no but I heard a bang". The cop goes on his way. We find the unbroken bottle centered on a stump in the woods. It's like it was placed there LOL.

There are many more instances of me being around people doing stupid things and yes I did more than my share of stupid things. However I just kind of watched as people blew shit up. I did however get to light the fuse on some farmers dynamite my uncle was using to terminate the existence of a stump. That was kind of fun. 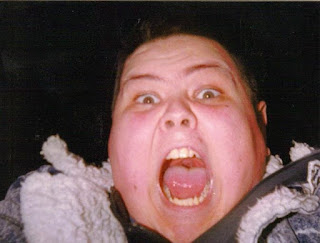 Photo of my before a VERY long road trip in 1986, but that's another story.