CRAZY INTERNET PEOPLE - A COMEDY LOOK AT THE LOONS 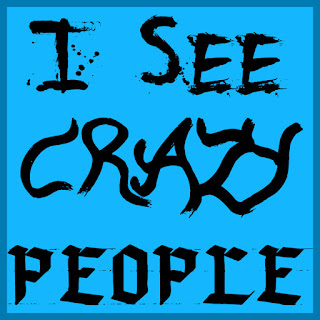 I seem to run into a lot of crazy people on the interwebs. People who will go out of their way to try and push their viewpoint on you. They also are incapable of accepting that you don't agree with them.

Several things happen when you disagree with a crazy person. 1 They go bat-shit crazy and start to attack you. 2 They try to change your mind and won't shut the hell up until you block them. 3 They start posting to your friends what kind of monster you are.

The deal is, most people who are out of their minds crazy - I'm talking should be in an institution - don't realize they are crazy and often they think everyone they talk to is crazy. Seems a great deal of these people have the internet and spend literally every waking moment on it trying to force their demented view of the universe on others.

I know a lot of people on both sides of the political coin (in the USA) for example. The vast majority of them right or left are kind, caring and giving people who don't want trouble. However there are some who are just mental about it.

The crazy ones will spend all day talking about how evil the other side is and how they should be put in jail or how they are trying to destroy the country.

There is something else right there. People on the lunatic fringe seem to want politicians they don't agree with to go to jail these days. Does not matter if they have done anything wrong or not, they think they have and want them to be put in prison.

Again, they seem to not have a life outside the internet and spend a vast amount of time on the web spewing forth their craziness. I often wonder if any of them have ever worked in their life as they tend to be online 18 hours a day.

Some of these people will literally make it their life's work to go after a number of people (you know you're reading thing) and spend all day every day attacking them in some manner or another. These kinds I'm 100% sure have never had a job in their lives - there is no way they would be employed for more than 1 shift before being fired.

The latter category will literally spend decades going after people, making thousands of accounts to post crap that most of the time makes literally no sense at all to them and doing things like disliking their posts with multiple accounts.

You can ALWAYS tell it's the same person hitting dislike for example - if you have a small amount of followers and you get 1 or more dislikes on every (or most) posts, then yes it's certain to be a nutter who spends all day waiting for you to post.

The worst thing is, if you are not affected by the craze, it makes the very mentally ill ones nuts and they won't go away. They need some kind of validation in the form of you being upset. So when you just block them yet again and move on with your life - they will just keep coming back.

Literally no person I know who engages in social media or posts on sites like YouTube had not been hit with some crazy persons venom at least once every 3 months. Some will get the latch on crazies who just make it their life's work as well.

So what do you do? Well calling the cops I'm told (by many people) does nothing. As I said, they just keep making accounts. So all you can do is know these people are very damaged and have pity on them. Also just keep blocking and moving on with your life.

For almost all of us, it's literally only a slight inconvenience. After all in 99.5% of the cases these people won't leave their home long enough to do anything - so there is no worries at all. Just a slight annoyance like a fly you can't kill. They are easy to live with and do no actual harm.

So remember, when you see some guy on a street corner yelling and screaming incoherent babble - they are likely someone who lost the ability to be on the internet.