THE UGLY OWL VASE - A LOOK AT PERSONAL VIEWPOINTS 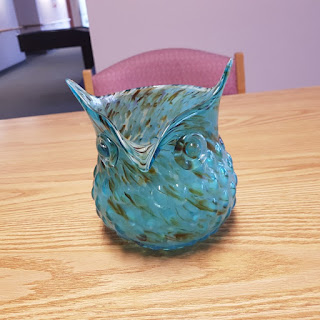 This is a perfect example of the subjective nature of what we think is beautiful. I took this owl vase because I thought it was very ugly.

Well I posted it on Facebook with the title "ugly own vase" and people on mass corrected me by saying how much they liked it.

I seriously do NOT like the look of it by the way. But what do I know - I also hate most of the VERY popular TV shows that exist. For example if it's a reality show, I'm going to hate it before even seeing it - as the format to me is BAD. Yet most people love reality shows.

The same thing goes for what I think is beauty. To me a more rounded and dare I say it, over-sized women it what I think of when I think beauty in the feminine form. Yet the rest of my culture things the stick figure model types to be the ideal.

If we look at different cultures, the ideal of art, human form and entertainment - it is widely different than it is here at times.

That being said, the "American ideal" of all 3 seem to be slowly spreading around the world. I actually hate to see this happen, as cultures are being watered down to fit an ideal that is alien to them.

I can actually see a day hundreds of years from now where there is a unified world government and only one actual culture in the main stream. There will however always be some kind of sub-cultures. That is, if humanity is not extinct by then and if we are not in bunker like communities trying to hang onto life after the climate changes so much we can't live in it.

Perhaps despite my thinking we are almost doomed and bound to die off, we will find a way to keep on living after the earth rejects us. After all as long as we can generate power, filter water and keep the soil in a closed system viable - we can exist - it's just we also will at that point have to let billions die to keep the small number alive.

But in one way or another there will STILL always be variations on what is thought to be beauty and attractive. That being said - if we end up in the "closed system" then more than likely people like me would be not kept alive, so I'd be screwed at that point. After all, there would be the literal need to only keep people able to work alive.

Anyways, Because I think over sized men and women are attractive, there is NO validity to me also thinking other people are less valid as people. To me we are all just as important - it's just that my brain finds a certain body type to be stimulating in that manner.

As for interacting I have great relationships with people of all shapes, sizes, social standing and ability standing - not to mention sexuality, religion... Well you get the point, I'll love anyone who is not a person looking to harm others.

Peace and love to you, and I won't take it personal if you don't think I'm sexy... LOL.