THEY ARE WATCHING YOU YOUNG MAN - EVERYONE IS 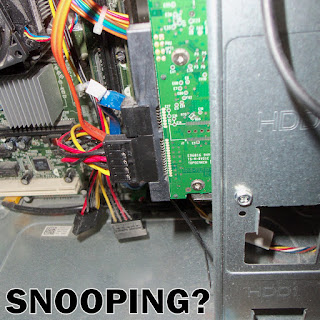 So there was talk of data mining and companies snooping at your files on Twitter today. This reminds me of a place that used to exist here in Moose Jaw.

See they sold reconditioned P.C.s and also repaired them. In a span of 2 months they had found illegal pornography on 3 peoples computers.

The thing is it got around that if you went there they where going to literally search your hard drive to see what is on it. People rightfully did not like this idea and stopped going to them. The rumors got darker from there - accusations of planting the evidence. This in my mid was unfounded, but it was obvious they where searching your files to see what they could find.

In the many years of people operating numerous computer shops in this city, they where the only one I am aware of that found things on someones hard drive.

It's like when you stash something in a not so obvious place and come home from school to your Mom holding it and saying "what is this about"? Your trust is forever violated and it is not possible to get it back.

Now I am no fan of people who would out and save photos or videos of people being violated to their computer. In fact I think it's reprehensible and should always be prosecuted. But the fact is how on earth did 3 people with illegal files on the hard drive turn up in the same shop in 2 months? Files that where in a supposedly obvious place.

Now I have talked to someone who knows a fellow that got busted in just this manner. This is second hand of course and to be taken with a grain of salt. But in this persons case, it was well hidden and named in a very much not obvious manner. The file names where all numbers representing what the image was and so on. So yes someone had to actually find the "hidden folder" and open it, then open the files to see what they where.

So yeah, if you have something to hide, make dang sure you don't keep it on your internal drive - I guess that is the moral of the story. As well if it's something you don't want the world to see for other less nefarious reasons, encrypt those puppies with heavy encryption.

It's not just big brother watching (and he is), it's the little guy as well. We live in a world where most people are looking to find some dirt on others - so be aware of that. After all information is power and people will use it if they can.

No I did not make a moral judgment in this post. That is obvious, DO NO HARM. This carries through to not seeking out images of people being harmed - that is doing harm by proxy. So OK there is my moral judgment.

BTW I'm kind of sure anyone looking at my search history on Bing would think "what the actual hell is wrong with this guy"? LOL. But yeah, I assume Microsoft is watching what I search. I know for a fact Google is watching. I've read where if you search key terms enough times in a certain time span - it dimes you out. I'd kind of like to see if there are cases where this has happened and evidence of it.

Lets also face the fact that everything you post online even if it's set to "me only" is being monitored and filtered to key advertising to you. Hell I'm 100% sure my phone is listening to me talk. There have been many times I've gotten ads for things we talked about at coffee that day.

On the other hand though - directed marketing does not always happen it seems. Facebook keeps trying to sell me servers (as in them big ass computers you run a business on) and the software to run them. Pintrest ONLY give me ads for children's clothing - not once have I searched for that one anywhere. So yeah - directed marketing my ass.

But the internet does know I like pizza and whiskey and often tries to sell me that. Hell it even knows where I get my pizza. So yeah, it's hit and miss.

Back to the original point - everyone is freaking watching everything you do - always. If you don't want it know - don't save it to the computer and don't even search for it. For GODS SAKE don't post about it in a Facebook group or post of video of you doing it on YouTube.