SHOULD CHILDREN HAVE THE RIGHT TO ASSISTED DEATH? 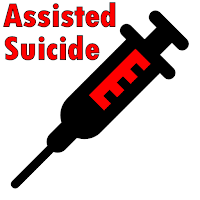 OK there is a certain sick kid's hospital in Canada that is thinking about providing medial assisted death to children under the age of 18. I have investigated this and found that there is a great deal of people who are convinced this will be left up to the doctors to chose weather a child is euthanized or not. This is just not the case.

As it stands now in Canada and by the rules in the province of Ontario, a minor can choose to not be treated anymore even if this will result in its death. This also is the case if the parents do not agree with the child’s decision. The requisite is that the child can make an informed decision on the matter. In the case of not being able to make informed consent, the parents can decide.

The idea here is to extend this practice to medically assisted death. The same rules would apply. It would be the choice of the child and not of the doctors.

I do understand that there is question if a child who is say 10 can make informed consent. I do not know at this time if there is a limit to age at which the child can chose for itself. There most likely is. This would carry over to the act of choosing to die with aid of a doctor (or nurse).

I have no valid argument against allowing this practice. As in the case of the people who responded to the media in this matter, there is little difference between denying medical treatment on yourself and being allowed to just end it.

The idea of life must continue no matter what because “God says so”, is absolute folly. No one should be expected to have a slow and painful death because of the rules in some antiquated religion. We must be protected from this kind of thing. People making rules on my life or death based on their religion. We have the fundamental right to freedom of and from religion in Canada after all.

To out and just lie about what you supposedly read in the report is more than contemptible. I have seen so dang many times where their people (God warriors) have spoken absolute lies. The doctor will not just up an decide the child should die to save some money and go give it a shot and end its life. The child will be allowed to make the choice, or the parents will be making the choice.

These are the same people that when the law came into effect about assisted death for people 18 and over, said that they will be putting old people down to save money. I can tell you for a fact that is not happening. No one’s grandparents have been put to death by choice of a doctor as a result of the new law. It’s just not happening.

This does not seem to affect the bullshit level of these people though. They just say that the medical industry is lying and covering up the fact they are putting people to death against their wishes. This kind of malicious nonsense to try and force your ideology on people is outright wrong. The best thing is, the same people who fight hard against being forced to follow the practices and rules of another person’s religion. That is the best laugh in this all.

I just love the amount of them spewing this crap as well. We have the right to live our lives the way we desire if it does not harm others. The fact that if they get their way, it WILL harm others does not seem to be wrong in their minds.

It’s the same rhetoric that was spewed when Gay marriage was signed into law in Canada. They went off the rails saying they will be forced to marry same sex couples on penalty of law. Well that never happened either. They also seemed to think that someone if two men or two women for married that all the sudden their marriages would be no longer valid. How the HELL that even works I don’t know. Think about it, if someone who is not the same religion as you get hitched, does all the sudden your marriage mean nothing? No, so get the hell over yourselves.

We need to stop listening and giving attention to these God warriors who would force their way of life on all of us because they think it is the right thing to do. If you want to be in a land where you have no choice but to live by rule of religion – move to another country where that is the rule of law.

While I’m at it, I want not only for the law to extend to children, but to extend to old folks and people who are no longer able to make a choice. I want to be able to have a legal document that says, “in the case of mental incapacity, I desire to be assisted in my death if I am terminally ill or in a state of profound disability.” Yes, I do realize that is one step farther “in the case of profound disability.” And we should have that right as well and of course it should be well defined as to what that means, not I can’t walk, kill me.

I’m also a fan of how other countries have allowed it in the case of extreme birth defect where the child will never live a good life and will be in pain or unaware of the world around it. I do however draw the line at saying “well grandma is unable to choose, lets put her down now.” But like I said the legal document saying if I get in that state of profound disability, put me down – should be allowed.

One last thing, I want the option (I know how fucking crazy this sounds) to be recycled into pet food when I die. I don’t think we should waste land on dead people. At the very best we should be turned into fertilizer or the like. Yes, now I sound like the loon. OK I’ll stop here.

Have a good day all and peace be with you.