THIS FORK IS OLDER THAN I AM 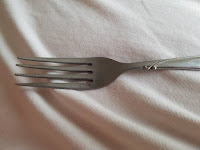 Well this is from a set of cutlery my parents had since the 1950's. So it's older than I am. It's the only one of it's kind I kept and I did so for the memories. The other forks I have are a lot more new and better quality.

For some reason there was not a complete set of cutlery however. There where no tea spoons or table spoons. However there where several butter knives, some forks and a couple of serving spoons. I don't remember ever having meat knives in the set, just butter knives.

I'm kind of sure most of them where tossed out or lost many years ago. I however always wanted this kind of fork as a kid and I don't know why now as the newer ones are much nicer.

When I moved in here I had a tone of these things and gave away all but 4 of each kind of cutlery. I have since managed to lose a table spoon some how and I got not one clue where it went. I must have tossed it out by mistake.

I have a couple of carving knives but they kind of suck actually and I might get rid of all but one of them. The other 2 are not nearly as good as that one. I already gave away the bread knife - I'll literally never need one.

Perhaps in January when I get the GST Rebate if I'm not behind in money yet again, I'll get some new stuff and get rid of all these old ones. The newest ones are at least 25 years old.

I don't need fancy, I just need something to use. Simple is good - I don't need to impress. I do however want a better carving knife for when I have a ham or a roast (almost never do).

Have a good one all.