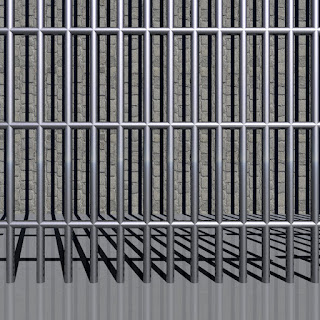 Friend has an interesting way of looking at prison. He thinks a conditional life sentence for any major  crime should be in place.

It works like this. Every 8 to 10 years you get a review. If you are a dick in prison and not socialized and keeping out of trouble, you stay in. If you seem to have tried to better yourself, then you get out.

This would piss off the left and the right I'm sure so it could never happen. The left would say it's to harsh and have all kinds of excuses for letting people out no matter how they act.

The right would think it lets people out of jail too soon because they can fake being good people. So you can't win at this one politically.

We also talked about the waste of human life that the system in the USA is. It's set up to create profit in companies that run prisons. So by influencing what laws get passed, it keeps people in prison longer and in some cases minor criminals in for life.

The idea of rehabilitation is meaningless in this system and the profit is in keeping the prisons full and a demand for new prisons.

There is a reason that the USA has 25% of the worlds prisoners in the system. It's not that other countries are lacking in legal will. Hell some of the prisons in countries that do not participate in this obscene system, you would not want to be in under any circumstance.

A system geared to keep people in for a long time does not seem to have any less effect on weather a person repeats his/her offence, or another offence. So why keep them in for extended time frames?

Then there was us talking about the death penalty. Now I'm not a fan and find it hypocritical to kill people because killing is bad. The thing is, in states that kill people, it's often done often. Texas for example has a particular liking for this kind of punishment.

The only reasonable justification I have seen so far was from a friend. It keeps them from killing guards or other prisoners. Well when you keep people in a very strict lock down setting and only with their kind, this dramatically lowers the amount of "innocent" deaths or harm.

If a person is deemed to be dangerous if kept in for life (literally life not like in Canada), then strongly restrict their freedoms. Don't just let them circulate with others.

The thing that spark me in this so called punishment is, it's 100% ineffective in stopping people from committing capital crimes. Or at least it's a very low number that are detoured from it.

It is in effect, only revenge. The thing also, the majority of families and friends who thought the death of the criminal was going to make things somehow better, when questioned after, felt no less suffering at all.

The only ones who did feel less suffering where people who for some reason forgave them. Honestly I don't know if I could. I have forgiven some serious things done to me in the past, but a murder, I don't think I could get past.

In any event, it is pointless to kill them for the most part.

Now we then moved onto the topic of drug offences. See in a couple of places on our planet, they do it different than we do. They made all drugs legal and controlled. They then spent the vast amount of money they used to spend trying to stop drugs on prevention and treatment. As well money is spent on safe injection sites and so on.

Now if we could just find a way to have a world with no need for money that does not involve a political system that ends up turning tyrannical in literally every circumstance in the past - then we would fix the vast majority of human suffering. After all the pursuit of obscene wealth has created a lot of hardship in this world.