THE CONSTANT VICTIM WON'T PAY FOR HIS MEAL 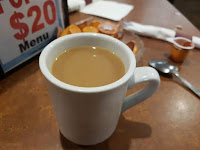 Well what can I say, I freaking love coffee. We go for coffee a couple of times a week all year round. Most of the time it's in the same spot (Smitty's in the Mall). I have to say, it's getting very expensive to just have coffee now. When we first started this it was like $1.00 for a bottomless cup of coffee out at a truck stop on the highway. Now in the mall it's $2.55 for a cup of coffee after taxes. But it's less than you pay at the "well known" coffee shops and you only get one cup there.

We tend to sit there for about 2.5 hours on average and most of the time someone orders something small to eat.

In all the many years we have been going there it's never been an issue with anyone at all. Our conversations can be a bit heated at times but not over the top or angry. We also can talk about some very adult topics and I would not be shocked if someone with kids told us to shut the hell up or something, but no one ever has.

Literally the only issue after many years of going to the same place is the same old guy 5 weeks in a row (always on a Saturday). The thing is, I'm 100% sure he is just using us as an excuse to play the victim and complain how terrible we are.

The last time he told the waitress (a woman who has served us and known us for countless years now) "those people are fucking vile". This was interesting as she knows we are all very nice and rather kind people.

He has a woman with him and she seems to be a bit afraid of the guy and literally never talks and does not even order anything. This last time, he alone, ordered food - this was right off the bat after they sat down. He did not even look at a menu.

Well to make it short, as soon as the food came he said he did not want it. He complained that he can't eat when he is being disgusted by us.

Guess what our topic was when they sat down and for the vast majority of the time this dude was there? It was death rituals. Now this was not at all graphic in any way. It was something that anyone in their right mind would think nothing of. So how this was "Vile" I don't understand.

Here is the other part, this place they sit you where they want you to go. The entire 5 weeks in a row the man made a point of sitting near us and just walked in and sat himself. You can't tell me that if you think people are "Vile" that you would at this point make sure to sit away from them.

At the time they got there there was seating all over the restaurant and they could have sat far from us, far enough they could not possibly of heard us.

So you can see my point. We are just an excuse to act up and be offended and be a "victim". I've seen the "victim mentality" online a great deal, but this guy is the first time I've seen it in real life.

To top it off he refused to pay his bill for the food, even though the staff knew he was being unreasonable. They even commented to each other about how rude and unreasonable he was. They knew his game right off the bat, just like we did.

He seems to have wanted us ejected as well. I did not hear what he said, but it sounded like it from the part that I heard. This was when they went to the till. The fact of the matter is, even if we where tossed out and not allowed back, this guy would pick someone else at random to be offended by and as an excuse he should not pay for his order that he went out of his way not to eat.

In the time we have gone there, there has to have been literally a thousand people close enough to have heard us (we have been going there for many years). No one has ever complained even once before this guy. Hell there have been bible toting people right next to us at times and there was no issue.

Makes me wonder how many other places this guy does this. He the last 4 of the 5 weeks has shown up very close to the time we tend to be there. He knows we are going to be there and goes out of his was to seat himself and his I'm assuming wife near us. He ignores the "wait to be seated thing to sit near us". The last time they literally did not order anything - not even coffee. They just sat there and he complained about us to his silent wife.

I'm sure literally anyone reading this that is not going out of their way to be unreasonable can see the point here. In any event, when talking about this to others, there have been several people who have had similar stories. I've even talked with a person who worked for 15 years in a place where a woman would come in every Wednesday at 2pm on the dot. She would then order a meal and as soon as she eat half of it, would call over the waitress and very loudly say how crappy it was and then refuse to pay and storm out.

Remember, this woman did this for 15 years that the guy knows of. At no point in time was she banned by management for some strange reason. You can be assured after the 3rd time it happened her photo would be on the wall of the staff room with a note telling them to ask her to leave as soon as she shows up.

I'm sure there are stories of things happening like these 2 instances all over the place. After all crazy people tend to want to show the world how freaking out of their mind they are. And the victim mentality seems to be growing.

Have a pleasant day folks and keep smiling - you deserve to smile.