PHONE STORAGE AND WHAT I WOULD LOVE TO HAVE 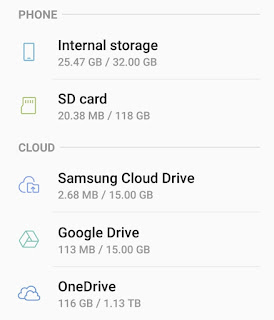 So I know I got a few things on the phone and all, but yeah - these days 32GB storage is not that much. Since Being that more than half of the storage being used is the OS, ya know. I would very much like it if I could toss literally ever app I have on the SD card - but most of them can't be moved to the SD card.

I've also got a dozen things disabled that came with the phone. The ability to delete them off the phone because I will literally never use them would be nice. I don't want to run the danger of rooting my phone just to rid myself of a bunch of apps I don't want.


Don't want to cheep out on an SD card either. There are a great deal of them on Amazon and so forth that are very cheep priced and claim they are 256gb or 512gb and actually are not that size. Most of them that are that size don't tend to live long.

The worst part is the 64gb card I had in the phone before was actually expensive and it blew up very soon after I stuck it in there. It took a hell of a lot of doing to get it replaced and there was a freaking government charge for getting the replacement sent over the border to Canada that was more than the card was worth. I in the end got the manufacturer to pay that charge. But it took months to get it back. Right now it's in my tablet NOT being used.

Being that I'm never going to do more than 1080p on a video, I don't need a top end super fast card that handles 4K and so on. All I use it for is vlogging - so who needs to see my face or whatever I'm showing in 4K? You don't being that most people are watching on their phone - it's a total loss.

I tell you I would love to have a 1TB storage on my phone and a 1TB card in it - just because though. I'll literally never use that much in my life, but I freaking want it.

Lets face it, some people do record their entire vacation on the phone in 4K and 128gb ain't going to do the job. So they have to go threw the task of dunking it on external storage or into the cloud.

I have done that when I only had a 16GB card and let me tell you how long it takes to upload 12GB of video to onedrive... Well I don't actually remember, but it was most of a DAY. I so regretted doing it. I then got an app that lets me dump things on the wifi to my computer and it's a LOT faster than one drive.

To tell the truth, I'd like to have a phone with 8gb of ram, 1TB of storage, 1TB card, 50mp camera with 4X optical zoom, and 8K video on both front and back cameras with the ability to do dual camera recording in 8K. Why? Because it would be cool. Freaking of no use at all to 90% of people - but I WANT IT.