OOPS AND I'M IN THE HOLE THIS MONTH 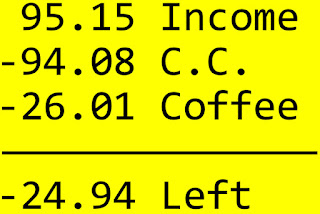 As well I had no choice but to order something in the other day for pain management and that put me in the negative.

All this is with $47.05 from the Co-op in dividends. Next year that will be probably nothing as I don't actually shop there now. So for half a year of shopping cheaply there, that ain't bad.

So lucky I got the Co-op money or I'd really be in the hole. I did however just order a 52oz coffee travel mug thing. That I just had to have you see. It will be fun to take outside with me and enjoy sipping on it.

So if nothing blows up and if I don't need a cab or something, then all will be well and I'm only a bit in the hole.

As I'm paying off the credit card before the end of the term, I won't get interest on it and the overdraft interest is very low in comparison - so it makes sense to pay it off and be in the hole in the bank.

Anyway, as soon as I think I'm ahead something bites me in the ass. This time it was my own stupidity on not checking properly before I got something. Last time I had something stop working and had to replace it. Another time I had to pick up medication that was not covered and that was a hell of a price.

The moral of the story is, I'm never going to be up at the end of the month EVER. Something always happens to eat the money or I get foolish and have too much fun.