HAVING AN OPERATION DONE SOON 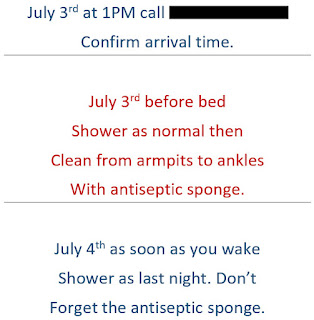 So I'm going to have a rather large hernia on my lower left abdomen fixed on June 4th. I know I typed in the wrong month for my note I stuck on the fridge - but I know when it is, so it's all good.

This will be an in and out kind of thing. I will have the operation and be sent home that day unless something goes not to plan.

The last one I had done was beside this one in the middle of my lower abdomen just over the belly button. I was in the hospital for 3 days for that one. What a drag that was. The guy who did it was a little more cautious as the guy doing this one it seems.

The first one was an emergency as it had strangulated and you can literally die from that, so in a matter of 2 hours I was in the operating room getting it done.

The first one had the side effect of giving me a lot of pain in my man bit (little Dave). The catheter seems to have had a rough spot on it and DANG it hurt coming out. It kept hurting for over a week in fact. Was no blood, but dang it was not fun.

I have one in before and it did not come close to that. It just slid out and that was that. A slight discomfort that went away in 30 minutes. Not this time.

But the chance I'll even have one in this time is very low. I will however have a tube down my throat to help me breath, as they paralyze you when they operate on you. This is to keep you from moving of course. It's a safety measure.

I've never had an issue with being put under before, so I don't expect anything to happen. My heart is actually in better shape than it was the last time, so I should be safe to be let out the same day.

I will have a friend staying over with me (over night). She will keep an eye on me just in case I start to bleed inside or something. I expect that after spending time under on the table I will be up all night. I know I was the first night after my emergency one.

But in all it's going to be fine I'm certain. I did joke if I don't post on Facebook by the 6th I'm dead - but I constantly joke about being dead or that I'm going to die soon - so... no one takes it serious. We are a strange lot my friends and I after all.

I tell ya, if I could have someone video record this, I'd do it. Would be interesting to watch.