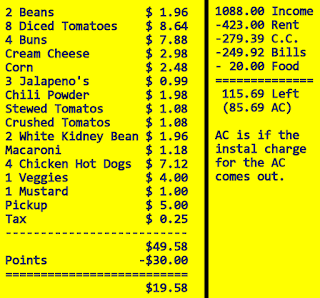 I had a lot of unexpected expenses this month so there is a great deal on the credit card. So I have to pay that off next month and it's almost $300. So by the end of it all, there will be very little "fun money" left next month.

Being that I am trying to NOT have bad for me foods next month, I won't be needing a lot of "fun money". The challenge is to not drink booze or eat things like chips and pizza or burgers at all. So that strongly limits what I'll be consuming and the only sort of bad things will be the chicken hot-dogs once a week.

So with luck they will skip the install fee until July as they did last year - that leaves us paying on GST rebate month and we have extra money then. So it would be a lot better that way. But I've done the math for both situations.

Coffee outings for the month are not included and will be about $20. This is a non fixed expense as sometimes my friend pays for my coffee as she knows I don't have the much money. She is such a nice person and for many reasons I'm glad to have her in my life. She also gives great conversations.

In any event, last month I ended up VERY in the hole, so I'm going to try my best to not do that this month. In July I'm getting a new coffee maker and I hope this one lives till then. I generally get one once a year just in case. I don't want to have one blow up and not be able to have coffee for weeks on end or have to put it on the card.

I have the added expense this month of an out of town trip to a doctor, but that is calculated in on the credit card expense. But life goes on. This is even after I got help from a friend with the money - still in the hole. But as I said a lot of things came up and I had a bit too much fun. Got to get back on track the next month.