Being Happy With Where I Live 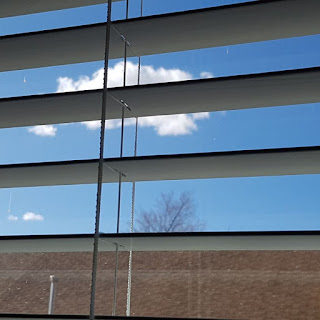 I've never lived any place that had a great view. But at least in this place I can see the sky. The last 2 places all I got to see was the side of another building.

The first apartment I had seems like half a lifetime ago. It looked out over the train yards. This was the actual best view I ever had.

I lived with Mom and Dad for a time after school and so on as I was working dead end jobs and what not. I also ended up unemployed for months at a time as most of them where temporary jobs or the company would go under and that would be that.

Cooking for just a few pennies over minimum wage for 20 hours a week was not going to get me living on my own. So I stayed home for many years.

In the homes that we had the best view was the one place where we had a big yard and some trees in it. At least that was green space. Most of the other places ass I saw was other houses.

don't get me wrong, I'm glad I had some place to be warm and safe. Yet it would have been so nice to have had a view of some sort other than other houses or a wall or a train yard.

For a short time I was in North Battlford. I was fixing shit to sell for cheep and I often wondered how they made money paying someone to fix it then selling it for next to nothing. Well the boss man was a control freak and literally wanted me to work 8 hours a day 7 days a week. Well if I knew that before I went there I would not have bothered. But the place I was in for this couple of weeks that I tolerated the boss from hell had a view of a nice green valley.

Then there was a temp job in Regina and a view of a wall as I stayed with a friend rather than drive back to Moose Jaw every night. Saskatoon was about the same - a view of an empty lot for the 3 weeks I was up there to do a contract job. The boss had us put up in some two bit place and there where literally hookers around it...

Other then that I have been in Moose Jaw most of my life. The first year I spent in Saskatoon then was relocated to Moose Jaw. Been here since. Long ago I wanted to be any place other than here, but now I want to stay for the rest of my life.

more than likely I will be looking at that bit of sky over the roof of a church for the rest of my days until they find me dead in here. I'm happy here so that is fine with me. The only way I'm out of here is if I win the lotto and the chances of that are about 0... Well just over 0.

Being that I like cable TV and very fast internet I rather doubt I will be in a place with a great view if I do win the lotto. Instead I will have a massive TV in a room with a vast selection of whisky on one side and a vast selection of Pusheen stuffies on the other side.

But maybe I can get someone to drive me out to the country side soon and take a bunch of photos. I seem to have that desire more than often after the trees lose their leaves and before the snow comes.

There is of course a park not to far from me. A short walk and I'm in a green space enjoying the world going past me. So It's all good... Anyway, time to watch some things of my DVR and have the rest of my coffee. Enjoy your day and keep smiling.