Two Rants About One Group Of People 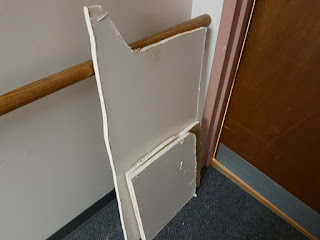 This is the drywall from the repairs that took place over two months ago down by the garbage shoot. Now they sent a guy and to do this and it never got finished. 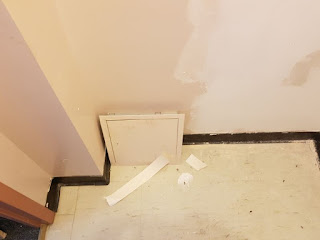 Access hatch that they had in before and is not sitting on the floor for over two months - NOT installed. 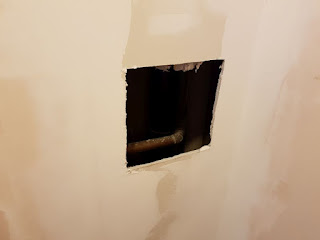 The hole the access hatch should go into. Literally it is a spring type thing with these tabs that hold it in place. All you do it put it in the hole and you are done - it holds it's self there. So end of the day comes and instead of putting it in and hauling the drywall out to the bin - just walk away and never come back. Work ethic at it's best. 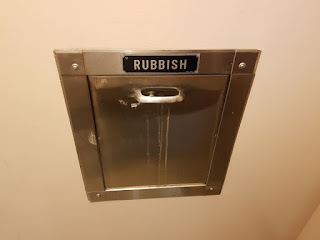 This is the "Rubbish Shoot" or garbage shoot for those who don't know the queens English. Now they told us all don't get it all dirty with wet garbage. So what do the builders do? Toss down wet rags and bits of drywall. So what do you have left? A bunch of drywall dust stuck to the shoot like cement from being wet. You can see where it ran down the door. Once again - work ethic at it's best.

When I was a painter I would have been fired for doing something like this. Then again the lamp on the wall above my PC is covered in paint splatter - again, if I left that I'd have been fired. It takes a moment to clean that shit off and after it dries it's too late. Why the shade was not removed before painting or at least taped I don't know.

Then there was the day it turned very cold outside. Well the boiler was not on as it had been at that time off for three days for upgrades to the hearing system. Well at the end of the day instead of thinking "we should turn that on" they just went the hell home. We ended up freezing in the night.

You have to remember that most people here are very old and or people with medical issues. So being exposed to the cold for me was literally very painful. Once again work ethic. Or should I say lack of humanity? Maybe they where literally just too dumb to realize, but think about it. You don't leave people freeze like that.

I like the people in this building and it's very quiet. But the lack of care and attention to detail can be staggering at times. Think about it hard - for the cold night to happen how many people had to FAIL at doing a proper job? Several contractors and a hand full of people who work for the housing authority.

Then there is the news paper in town that "showed interest" and to the best of my knowledge after interviewing me and taking up my time and the discomfort of some strange person in my home - never ran the story. After all, we are poor people and in the eyes of most people these days we don't actually matter. Even if we are the ones who need the most protection from situations like this.

To sum it up, your average person does not give a shit for anyone but them it seems and work ethic is dead.

By the way, drink a shot every time I say work ethic.... You will enjoy the blog more.