Got a New Roaster Pan and OPS 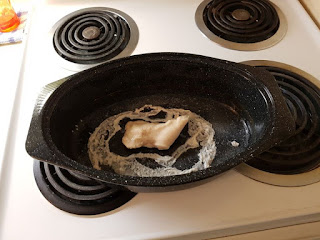 Got this 13 inch pan instead of the 26 inch one I had. The old one was starting to rust so I got this one. I downsized as I don't need the big one to cook for myself.

I forgot rule #1 of pans - the smaller they are the faster things cook in them. So I burned the chicken breast.

The white stuff is what comes out of the breast as it has salt water injected in it. This is what you get when you buy bulk ones in a big 4 km box. There is no way around it.

Frankly 80% of the salt comes out when you cook it so it's all good. But you get that stuff at the bottom of the pan. Some people actually boil them instead to get more of the salt out.

Normally I get 2 boxes but it leaves me with leftovers and every few months there are enough leftover from the month before that I only need 1 box - this was this month.

They are $5 more at Safeway than at Co-op but they are better tasting and less tough as the Co-op ones. So kind of worth it.

In any event, I have re-set the oven to a lower temp so this won't happen again. Sigh. I should have know it was going to happen but I just did not think.