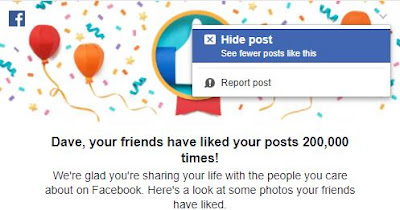 So FB keeps giving me stuff like this that I really don't want to ever see as I just don't care and it clutters my feed. I hit hide post and keep hoping that FB will get the freaking clue - it never has. I still get these dang things and how the weather is going to be and a pile of other useless information. Not to mention the fact that while I will be reading a post FB will change to "Top stories" and POOF the feed changes and the thing I was reading has vanished off the face of the earth. 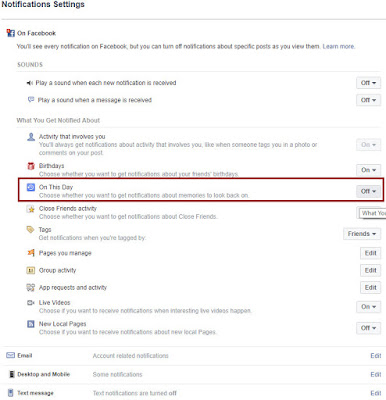 Here you see that I have it set to NOT show me "on this day" and yet every single day there it is showing me things from years ago. Like the other day when I was missing my dead mother kind of a lot and there was a photo of her to make me literally cry.

There are so many things I would LOVE to turn the hell off and have them actually be off. Things like "recommended friends". I don't know these people an in the 10 years I been on FB I have actually added literally 1 person from that list. It keeps recommending people from my past that I have no interest in ever contacting.

Now there is a new bug on the PC that at least in Chrome is very annoying (don't use anything else). You go to type a new status and it tosses you into Insert Mode and you end up typing a few words before you realize that the first letter of the first word is being pushed along the end of the line.

Now lets talk about the Android apps shall we? In messenger I have zero interest EVERY in stories yet there they are and I will never in my life want to start a group yet every last time I open messenger there it is asking me if I want to start one. Sigh...

The FB app is massive and takes up as much room as 15 other apps. It also seems to crash a lot. I had to uninstall it and messenger as they both started to crash literally every 5 or 6 seconds non stop.

There is no updates as of yet to fix whatever the HELL that was but I tried an old trick of uninstalling and obliterating every fragment of it in the file system... This took like 15 minutes. Then I reset the phone and reinstalled them - seems to have fixed the crash bug for now. I will see how long it lasts.

Getting back to the PC there is one more thing I would LOVE to go away forever - the posts of someone I am friends with liking some random person I don't know's post or commenting on it. I get that this is a networking site and all but I spend 40% of my time leafing threw these kinds of posts for no reason at all. I really have no interest in them 95% of the time.

I would also like to have a filter that blocks all political posts and does not let anyone tag me in that crap. Yes now and then for the lols or to show how stupid they are I will post a MEME or a link to some satire site. But 99% of the time it's just people complaining their ass off about something that is NOT going to change. Trump mispells coffee and I have to hear about it and see the coffee cup posts for the next 4 years. Cough notice what I just did?

Then there are people who literally can't be proven wrong as they think God himself has imparted the truth in their minds. They also seem to get super out of hand rude if you don't agree with them 100%. Debate is all but dead as no one can stand the thought of anyone else having a differing opinion in any matter. Hell I saw someone bitch about a video saying the guy buttered the bread wrong. Sigh...

Still, all in all, most of my friends live in this cyber world and I will never meet them face to face. It's needed interaction and a great deal of joy no matter how much annoyance I have to put up with to get threw to the cat posts and jokes... Peace and love - Dave.