Real Mans Coffee Cup AKA Lots About My Coffee Addiction 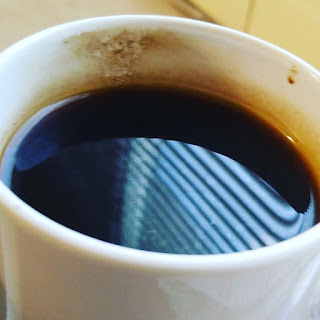 Well this is my coffee cup. You know how most people actually wash it when they are done with it? Well I just let it sit on the end table until the next use generally.

I'm sure there is some kind of slight health risk but oh well. It's not for lack of desire to be clean as my place and the other dishes are spotless all the time.

I just have been leaving it dirty for weeks on end for my entire coffee drinking life. Sure in the start when I was still with Mom and Dad, Mom would grab it and clean it. Then I moved out and from day one it sat dirty.

I tend to get bored of using the same cup after a week or two then I clean the old one off nice and good and put it away then get out a new one to let stand for a week or two.

I swear it does not actually effect the taste all that much, but it does make people say something when they see it. I just tell them "It's a real mans coffee cup". They generally roll their eyes at this point.

BTW I normally drink 6 to 10 cups of coffee a day. In this mug that is 3 fills as it's kind of big. I've also noticed that over the years what volume is called a "cup" in a coffee maker has gone down from an actual cup to 6 oz. This is a lie of course as a REAL cup is 8 oz. I'm sure this is a ploy to make more profit off of us some how.

Hell there are a couple out there that call 4 oz a "cup" - but most of them are the pod kind and well, no real coffee drinker drinks them. After all I don't really want to pay over $1 for a single 4 oz serving of freaking coffee. Yes I know some of the pod makes actually give you 6 oz instead.

A hint for better coffee is distilled water. Also always use the bamboo filters, the paper ones trap some of the taste and caffeine in them. The price is almost exactly the same for a box of both kinds. BTW Bamboo grows WAY faster then trees so it's better for the freaking planet...

I have a friend who makes a pot of coffee the puts it in the FRIDGE over night and drinks it cold the next day. I think she is mentally disturbed and in need of medication myself. Coffee needs to be fresh and hot, not cold and stale. OK have the "ice coffee" when it's 105 outside, but at least have fresh...

I also tend to put in 2 scoops more coffee then they say to put in the maker. It's just better. I prefer the dark roast although if I drink it after 6 pm I end up with tummy issues in my sleep and get woke up by it. If you need more of a boost, try the light coloured stuff - it tends to kick you harder.

Oh and I tried death wish coffee and like 2 other people I know the taste was actually kind of light for "the strongest coffee on earth". It did kick me in the ass though I will give it that. There was also a nice sticker in the package to put on my PC case... Anyway, it's time to go and sit in my chair and listen to some music.