Reflecting On The 5 Year Anniversary Of Moms Death 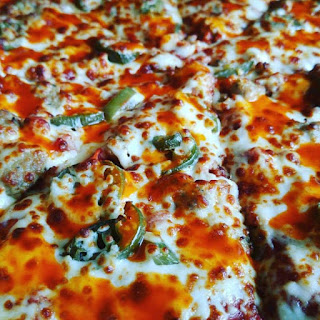 So I was down to $23.71 and it is the five year anniversary of my Moms death. I felt very much like comfort food and blew $18 of it on a pizza. This fed me twice so not a terrible deal and hay it was delicious.

So now there is five bucks in the account until I get paid in 8 days. I can live with that as I have a lot more food than I need and a lot of coffee in the can.

So now that the fears of running out of food are crushed I was playing with a new app and liked it so I paid $1.99 to remove the ads. This was worth it to me as my God on a hockey stick there where a lot of ads and they were 40 second video ads for the most part. Being I am going to use the app often I paid it...

But yeah, five years Mom has been gone. Five long years. Also at the end of the month will be the end of five years of vlogging every single day. That in its self I did NOT think was going to happen as I did not actually go out of my way to do it.

The thing is, I feel like it was just a few months ago that Mom died. I remember with full clarity sitting there for over two hours waiting for the end to come. When the end came it was obvious. The time I sat there I know was over two hours but I had literally no concept of time and it felt like only a few moments as I was on intensely focused on her.

I imagined it would be the same as when Dad died and a devastating blow. But instead it was a relief as she had lingered on a long time as a shell of what she used to be. He mind long gone and her body less than 80 lbs. She looked like something from the archive photos of the death camps (not to belittle that tragedy).

Before she was vegetative she had gone blind and was in a state of fear as she was already seeing and hearing things that where not there. The cancer had spread to the brain you see. Before that she had lost the ability to talk and feed herself. Before that she was talking to people long dead and pointing at the dog that was not there and speaking of things that could not be.

She was at one time a strong person who enjoyed life and had a lot of love to give this world. She was my rock in a time where I was lost to depression and the reason I am still here today.

It was the most difficult thing I have ever done to watch her fade into what she became then to just lay there rotting away. So you can see why I was relieved. Her suffering and the terrible pain of watching the person you love the most slowly turn into a living corps was now over.

So today I eat pizza although I should have saved the money. And now I think I will just sit in a dark room for a while and let the tears roll down my face. You see the pain is just as it was then on the anniversary of her death. You don't get over it, you just slowly get more used to it. The loss left a hole that will always be there.

If you have loved ones, tell them you love them. Don't just assume they know. You might never be able to tell them one day. It is a great comfort to me that Mom knew I loved her and that I was there for her every day, visiting her in the care home. So many just leave them there and never visit. I think that is worse than dying, to know you are not wanted. Anyway, time to just be alone with my thoughts awhile.