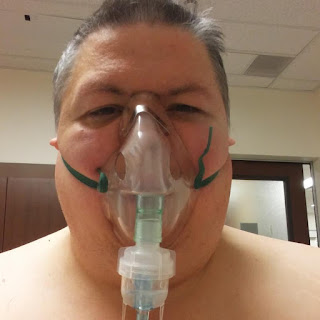 So been feeling like hell for a week now. This culminated on Saturday July 8th 2017 with me in the ER not able to breath or do things like walk that far without losing my breath. O2 saturation level was 92%.

94% to 99% is considered normal. So 92% is just slightly low, but I normally sit around 95% from what I can recall from being tested in the past.

I have a flue bug and it's hit me hard with a fever and so on. Now they gave me a nebulizer and it helped. There was 2 treatments of 2 medications in each one. This leads me to start thinking do I have asthma and they just can't seem to figure it out?

After all there have been many times where I was VERY short of breath for literally no reason. The other thing though is my finger nails are not turning blue or anything so I don't know about that. All I do know is the nebs helped a lot.

At the time I was going from dripping in sweat to freezing cold. I thank God that is over and I am on the mend now.

I was sick to the point I literally could not stand in the kitchen for 15 minutes to cook a meal. So I had to order in. I got some help from some friends and was able to NOT be dead broke before I was well enough to cook again. (I am almost broke now though)

It got better in a hurry, that is the best part. In the past when I was very sick it took a lot longer to slowly gather strength. This time it was a matter of 2 days and I was very much able to do the cleaning and cooking by myself.

From now on I'm going to be getting the flue shots and a pneumonia shot. I don't know if they are covered or not, but this is too dangerous to have happen again with a bad heart. I don't need to be dropping dead because of the flue.

I also managed to scratch myself in a strange place and get a slight infection. This happened in the shower when I was cleaning my butt. It was at the very top of my butt crack and was actually rather painful.

Now I am actually used to being in a lot of pain so it might sound strange to hear that I was crying out in pain when it was touched. Thing is my back is hurting right now 5 times more than the infection was. But the pain is constant.

The brain can get used to pain and ignore it until you reach a level at witch your brain can no longer tune it out. In fact you can become so good at this, that you will actually pass out as a reaction to pain and not know you where in this level of pain. It's happened to me several times.

The thing though, when the pain is sudden the brain needs time to suppress it and the shock will make you react. This is what happened to make my cry out in pain when it was poked.

but a little dabbing on of some cream for several days and it's fine now - all healed up.

I have been putting off going for coffee with a friend however. I am still contagious and he is already compromised with a serious and pervasive infection in his body. I don't want to make him a lot more sick than he is now. I will wait for at least a week after I stop feeling the effects of this flue. Yes it's still kind of hanging on - just a lot better now.

In any event, I am wondering about the breathing thing. I know it's not to a point where it is dangerous 99.9% of the time but it did feel rather bad a few times for no reason before I ended up with the flue. Oh well, I wish I could say I have 100% confidence that my doctors know what they are doing. But with past experience and the fact they literally ignored my Mother to DEATH, I know this is not going to happen. I have low confidence, but I'm stuck with them.