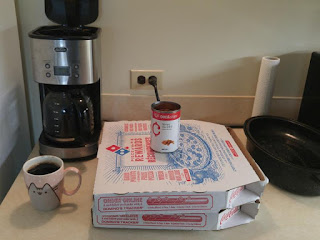 No the pizza was not in the same day or even the same week. This is how lax I have been with picking up - it sat for 9 days by my filing cabinet till a friend joined it and I stuffed things in them and tossed them in the trash bin. 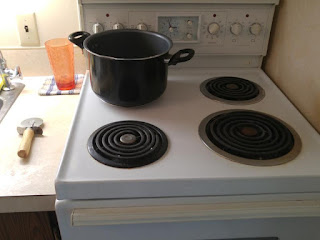 I us this pot almost every day and the last month or so I have not been putting in under the counter, instead it's just been sitting on the stove ready to go. Pizza wheel is from the pizza I got - they cut them to wide so I cut the pieces in half down the middle. 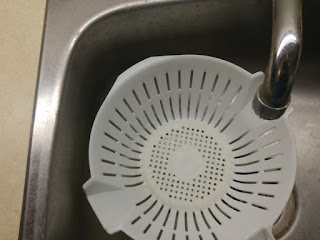 At least I get at the dishes quick and don't let them stack up. The strainer was cleaned just after the photo and put in the drying rack for a couple of hours while I watched shows off my DVR then put away. Normally the pizza box would NOT have sat there for 9 days. But I just kept ignoring it for some reason this time.

BTW that was the last of the coffee and I lift the lid so it dries out (it's rather dry in my building and it dries fast) - This way there is a hell of a lot less chance of bacteria growing in the water container. The night before I go to bed I will put a new filter in and fill the pot with 12 cups of water and the next day I pour it in and add water then turn it back on. If it's going to be a rush start, then I will put the coffee in, pout the water and just have to close the lid and hit the button the next day. This saves me only a minute or two, but if you are rushed - times saves add up.

Oh - normally I put the pizza boxes and things like it in the recycling but this time they where filled with stuff that don't go there and rather than waste a bag I did it this way.