A TRIP TO THE ER AND PAIN MEDS THAT DON'T WORK 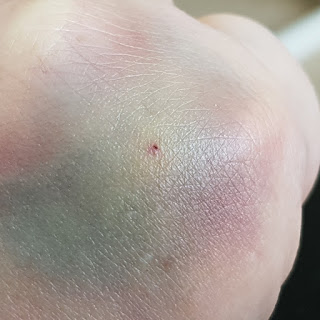 Was at the ER the other day and they poked 3 holes in me in total. 2 for bloodwork (they never get it from my arm and need to use the hand). The other hole was for an IV line to put contrast dye in me for a CT scan. 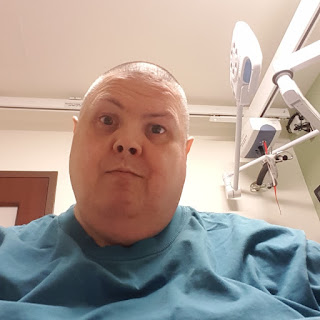 I called 911 about 3:45 PM as I was in massive pain. Was a level 9. I was almost out of my mind with the pain. It came on sudden and was in a location below where the hernia repair with mesh was done.

Now I know there can be complications with the mesh like having severe pain and cramping for months after - and in some cases for the rest of your life. However, this was sudden and weeks after the operation. By the time I was into the CT scan it was a lot less painful.

They told me the mesh and stuff where all OK on the scan but there was a large pocket of fluid inside me. I have to wonder why it did not hurt this bad before if this is the case. It still is a bit painful in the aria but not even close to what it was.

The strange thing is direct pressure does not effect it, instead if you press over top of my belly button it hurts more in that lower location - also no pain on the rebound (when they suddenly let go). So it's interesting.

I've been having cramping feelings and sharp spikes of pain since the operations. I see the doctor on Monday (if they don't move my appointment again) and will see what is going on from him.

Also I wish to talk to him about the fact that I'm rather sure Opiodes don't seem to work on me at all. I know after the operation when I was left alone to dress and get ready to go home I was in pain like I have never been in before. I was supposed to have been given a shot some time before that (I don't recall getting it), but there was no relief from pain at all.

The meds I was given to pick up at the drugstore did exactly nothing as well. When I took 2 of them pills instead of 1 the pain actually got worse.

So if these things don't work for me at all, what the hell can they do for me in the future if I am in a great deal of pain? Is there something other than Opiodes that can be used? I literally have no idea. All I know is I never want to experience what I went through in the hospital and the 3 days following ever again.

As for the cramping and pain spikes, I read that this can happen with the mesh repair and sometimes will go away withing 6 months but on rare occasions it lasts the rest of your life. I sure as hell don't need extra pain on top of the Fibro pain that I always have.

In any event, I will see what he has to say on Monday.