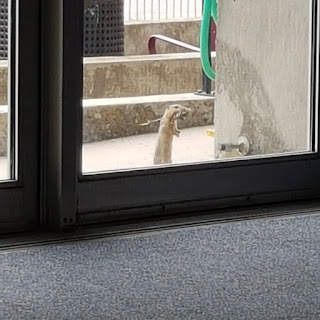 This is a gopher and it has a stick in it's mouth. I have seen these critters many times in the 52 years I've been alive. In fact, I've seem more than likely tens of thousands of them. In all this time I've never seen one with a stick in it's mouth. I don't know a great deal about them and have no idea if they nest with things like this. I do know they can have colonies that are many miles wide. I have not seen one look in a window before either. They are actually easy to tame and make a good pet. They are very social creatures. Ones that end up in the city however don't tend to have a lot of company, instead they usually are alone or in small groups. It's not common where I live to see them in the centre of the city like this. This little one is rather skinny as well.