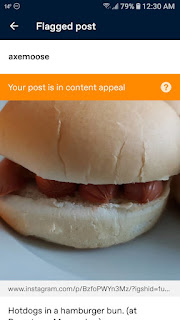 So the system after a short time seems to have been offended by my photo of hotdogs in a hamburger bun. It said it was nudity.

Seems the Tumblr bots are worse than the Facebook bots. It was auto flagged BTW. It said they detected it not it was reported.

The appeal was only 2 minutes and it was back up in my feed. It makes me wonder if on appeal if a human even looks at it.

I have literally seen nudity and even pornography after the so called clean up of Tumblr so I don't know how the shit these bots work.